“TO ALL OF YOU, AND TO MUSLIM AMERICANS ACROSS THE COUNTRY — RAMADAN KAREEM.” — PRESIDENT OBAMA 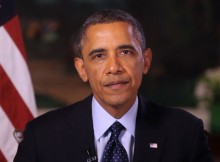 REMARKS BY THE PRESIDENT
AT 2015 IFTAR DINNER

THE PRESIDENT: Welcome to the White House. Now, I know that these are the longest days of the year, which is why I’m so glad that they put the first course down right away. (Laughter.) I know you’re hungry, and I promise to be brief.

I want to thank the members of our diplomatic corps who are here today, as well as our members of Congress, and all those serving across government who are joining us. And I especially want to recognize all the inspiring young people who are here today, many of whom I’ve put at my table. To all of you, and to Muslim Americans across the country — Ramadan Kareem.

Our annual White House Iftar recognizes the sacredness of Ramadan to more than 1.5 billion Muslims around the world. It’s a time when Muslims recommit themselves to their faith, following days of discipline with nights of gratitude for the gifts that God bestows. It’s a time of spiritual renewal and a reminder of one’s duty to our fellow man — to serve one another and lift up the less fortunate. The Quran teaches that God’s children should tread gently upon the earth and, when confronted by ignorance, reply “peace.” In honoring these familiar values together — of peace and charity and forgiveness — we affirm that, whatever our faith, we’re all one family.

Our Iftar is also a reminder of the freedoms that bind us together as Americans, including the freedom of religion — that inviolable right to practice our faiths freely. That’s what Samantha Elauf represents. She was determined to defend the right to wear a hijab and to have the same opportunities as everybody else. She went all the way to the Supreme Court — which I didn’t do at her age. (Laughter.) And she won. (Applause.) So, Samantha, we’re very proud of you.

When our values are threatened, we come together as one nation. When three young Muslim Americans were brutally murdered in Chapel Hill earlier this year, Americans of all faiths rallied around that community. And obviously, tonight, our prayers remain with Charleston and Mother Emanuel church. As Americans, we insist that nobody should be targeted because of who they are, or what they look like, who they love, how they worship. We stand united against these hateful acts.

These are the freedoms and the ideals, and the values that we uphold. And it’s more important than ever, because around the world and here at home, there are those who seek to divide us by religion or race or sect. Here in America, many people personally don’t know someone who is Muslim. They mostly hear about Muslims in the news — and that can obviously lead to a very distorted impression.

We saw this play out recently at a mosque in Arizona. A group of protestors gathered outside with offensive signs against Islam and Muslims. And then the mosque’s leaders invited them inside to share in the evening prayer. One demonstrator, who accepted the invitation later, described how the experience changed him; how he finally saw the Muslim American community for what it is — peaceful and welcoming. That’s what can happen when we stop yelling and start listening. That’s why it’s so important always to lift up the stories and voices of proud Americans who are contributing to our country every day. And we have a lot of inspiring Americans here today.

They’re Muslim Americans like Ziad Ahmed. As a Bangladeshi-American growing up in New Jersey, he saw early on that there was not enough understanding in the world. So two years ago, he founded Redefy, a website to push back against harmful stereotypes by encouraging teens like him — he’s only 16; I think our youngest guest tonight — to share their stories. (Applause.) Because, in Ziad’s words, “ignorance can be defeated through education.” He wants to do his part to make sure that “Muslims can be equal members of society and still hold onto their faith and identity.” So we’re very proud of you, Ziad.

They’re Muslim Americans like Munira Khalif. And Munira is the daughter of Somali immigrants; she started an organization to support girls’ education in East Africa. She just graduated from high school in Minnesota, and she’s already lobbied Congress to pass the Girls Count Act so that girls in the developing world are documented at birth — a bill I was proud to sign into law last week. She’s even spoken at the United Nations. I was also not doing this at her age. (Laughter and applause.) This fall, Munira is heading to Harvard to continue her education in public service — which was a tough choice, because of course she was accepted to all the Ivy League schools she applied to. But we are very, very proud of you, and I know your community is as well.

They’re Muslim Americans like Batoul Abuharb, who was born in a refugee camp in Gaza, and when she was an infant her family moved to Houston. After graduating from Rice University, she spent a summer in Gaza working with the U.N. health clinic. After seeing people line up whenever new stocks of vaccines arrived, she started Dunia Health to improve the distribution of vaccines and tell families when to come in — all over text message. They’ve started with Palestinian refugees in Jordan, but the program has been so successful that the U.N. is looking to expand Dunia’s work to more countries across the Middle East. Batoul, we’re very proud of you. Congratulations. (Applause.)

So, Ziad, Munira, Batoul — they all talk about how much they value the opportunities they’ve had to succeed here in the United States. And they also remind us that our obligations to care for one another extend beyond our immediate communities, beyond our borders. So tonight, we keep in our prayers those who are suffering around the world, including those marking Ramadan in areas of conflict and deprivation and hunger. The people of Iraq and Syria as they push back on the barbarity of ISIL. The people of Yemen and Libya, who are seeking an end to ongoing violence and instability. Those fleeing war and hardship in boats across the Mediterranean. The people of Gaza, still recovering from last year’s conflict. The Rohingya in Myanmar, including migrants at sea, whose human rights must be upheld.

We’re proud, by the way, to have Wai Wai Nu with us tonight — a former political prisoner who’s working on human rights issues for the Rohingya and equal rights for women. So we’re glad to have you here with us tonight. (Applause.)

So these challenges around the world and here at home demand the very qualities you summon every day during Ramadan: sacrifice, discipline, patience. A resilience that says we don’t simply endure, but we overcome. Together, we can overcome ignorance and prejudice. Together, we will overcome conflict and injustice — not just with words, but with deeds. With what a hero of mine, the civil rights icon John Lewis, calls using our feet — getting out in the real world to organize and to create the change that we seek. That’s what so many of you do every single day. And that’s what we have to continue to do together, here in America and around the world. As the Quran teaches, let us answer with “Peace.”

May God bless you all. Have a wonderful Ramadan. And get back to dinner. (Laughter.) Thank you very much. (Applause.)