They Don’t Make Republicans Like the Great Paul Findley Anymore! By Ralph Nader 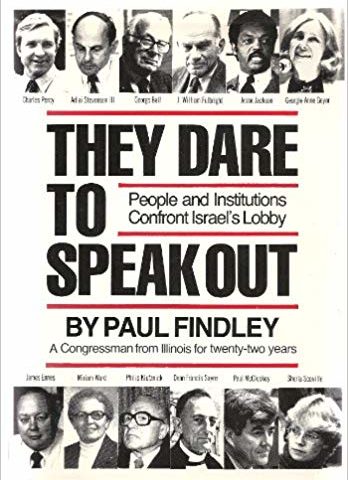 In his 22 years in Congress (1960 – 1982), Paul Findley achieved a sterling record for fundamental positions, proposals and breakthroughs that revealed a great man, pure and simple. He never stopped learning and applying his knowledge to advance the right course of action, regardless of political party, ideology or pressure from various groups.
Findley, a courteous, kindly, ex-World War II navy veteran passed away earlier this month at the age of 98 in his home town of Jacksonville, Illinois. The District he represented was the one Abraham Lincoln was elected from for his one term in the House of Representatives. Findley was a student of Lincoln’s life, and embraced Lincoln’s view that “a politician should be willing to reject outmoded ways of thinking that no longer fit the times.”

Findley was a thoughtful, studious legislator with a superb sense of justice. He was an early civil rights champion. His opposition to runaway Presidential war-making was reflected in his leading support for the War Powers Act of 1973, though he wanted stronger curbs on the White House’s unilateral militarism.
Having been a journalist and owner of a small-town newspaper – the Pike Press, before going to Congress in 1960, Findley used his writing skills to explain issues regarding agricultural policies, a foreign policy of diplomacy and peace, and nuclear arms controls. He was an outspoken early opponent of the Vietnam War and a critic of the Pentagon’s chronically wasteful spending. He was not a “press-release” legislator, staking out his opinions and leaving it at that. He worked hard and smart to lead, to persuade, to get down to the minute details of coalition-building, lawmaking and legislating.

Back in Jacksonville, after his Congressional career ended in 1982, Findley wrote books and articles and lectured around the country. He courageously defended Americans of the Islamic faith, after 9/11, from bias, exclusion and intimidation. He did his civic duties with local associations. He also started the Lucille Findley Educational Foundation, in memory of his beloved wife – an Army nurse – he met in war-time Guam. They had two children. He always found time to be helpful, to serve others both locally and nationally. He also played tennis daily into his mid-eighties.

Findley possessed more than a streak of mid-west populism. Agricultural subsidies disproportionally going to a few wealthy landowners upset him greatly. He got through the House, after years of rejection, and over the objections of the Republican leadership, a $20,000 yearly limit of such subsidies per farm. The measure failed in the Senate.
Once again, in 1973, he bucked his Party and introduced an impeachment resolution against Nixon’s vice president Spiro Agnew, who later resigned in disgrace over a bribery scandal.
It was Findley’s interest in U.S. policies and operations in the Middle East, following his 1973 successful effort to obtain the release of a constituent from South Yemen that showed his moral courage, his belief in dialogue between adversaries and his commitment to the treatment of all people with dignity and respect. It also led to his defeat by Democrat Richard J. Durbin, now Illinois’s senior Senator.

Findley learned that the dispossessed and occupied Palestinian people were being treated unfairly and deprived of their human rights and self-determination. He visited refugee camps in the region. He met with Yasser Arafat, head of the Palestine Liberation Organization (PLO), and he urged peaceful diplomatic resolution of that conflict. For this sensible, though rare outreach by a Congressional lawmaker, he earned the immense enmity of U.S. partisans of the Israeli government. How dare he speak out on behalf of Palestinians, even though, he continued to vote for foreign aid to a prosperous militarily advanced Israeli superpower?

As the New York Times reported: “He became convinced that the influential pro-Israel lobby known as Aipac, the American Israel Public Affairs Committee, had a stranglehold on American politicians that prevented the establishment of a Palestinian state and prevented rational dealings with Arab leaders in general.”
AIPAC activists, nationally and with their local affiliates, openly mobilized to defeat Findley in the 1980 election. They failed to do so. In 1982, they tried again, helping his Democratic opponent, Richard Durbin, to end Findley’s Congressional career by a margin of less than 1500 votes. AIPAC took credit for the win, raising over 80 percent of Durbin’s $750,000 in campaign funds from around the country. AIPAC’s executive director told a gathering in Texas: “We beat the odds and defeated Findley.”

Three years later, in 1985, Findley wrote and published his bold book “They Dare to Speak Out,” that described his efforts at peaceful advocacy for a two-state solution, which is now supported by many Israelis and Jewish Americans. In his book, he profiled other Americans who dared to speak out, and who endured intimidating slander and ostracism. Findley’s documentation of the suppression of their freedom of speech was an early precursor of what is going on now.

It was acceptable for the early patriots to boycott British tea, for civil rights leaders to boycott certain businesses in the South, for opponents of South Africa’s apartheid to launch a worldwide economic boycott. But some state governments impose sanctions on their contractors if they merely speak out in favor of the call to boycott, divest and sanction Israel’s illegal and brutal occupation of Palestine and its millions of Palestinians. (Today, Palestine is only twenty two percent the size of the original Palestine).
Findley wrote his autobiography in 2011. But it will take a fuller biography to place this modest lawmaker/public citizen, and wager of peace over unlawful wars and rampant militarism, in the conforming context of his times. His career contrasts with the present big business, Wall Street over Main Street, militaristic GOP and shows that the Republican Party didn’t always demand rigid unanimity.

To his credit, Senator Durbin eulogized Paul Findley, as “An exceptional public servant and friend.” He added that the man he defeated was “an elected official who showed exceptional courage in tackling the age old controversies in the Middle East.” Senator Durbin could not say this about a single Republican in either the Senate or the House today, nor of over 95 percent of the Democrats.

They Don’t Make Republicans Like the Great Paul Findley Anymore!