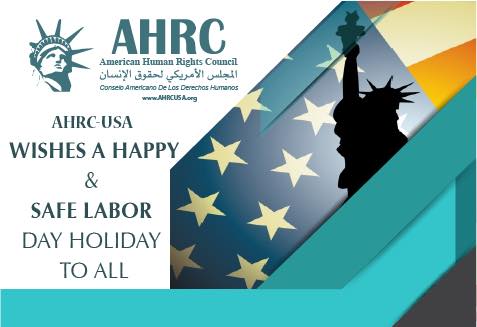 Labor Day has been celebrated in the United States for over 100 years, and has also been observed in Canada and other industrialized nations. Labor Day serves as an occasion to advance our common bond towards family, friends, health, peace and well-being as well as an occasion to honor and remember the pioneers of the labor rights movement and the contributions of American workers to America.

Labor Day serves as a reminder of the immense contribution of the working class to the well-being of society. AHRC salutes all the members of the labor force who have helped shape the nation’s foundation and its future.

The right to a living wage and a safe working environment is a human right. The US economy is creating unprecedented wealth, but the wealth is being concentrated at the top. This increasing inequality is stressing the middle and lower classes. On this Labor Day, we should remember this growing inequality and demand that the political system address it.

On August 1, 2019 The Wall Street Journal published an article on the economic crisis in the US. The article is entitled Families Go Deep in Debt to Stay in the Middle Class: Wages stalled but costs haven’t, so people increasingly rent or finance what their parents might have owned outright. The article read, in part: “The American middle class is falling deeper into debt to maintain a middle-class lifestyle. Cars, college, houses and medical care have become steadily more costly, but incomes have been largely stagnant for two decades, despite a recent uptick. Filling the gap between earning and spending is an explosion of finance into nearly every corner of the consumer economy. Consumer debt, not counting mortgages, has climbed to $4 trillion-higher than it has ever been even after adjusting for inflation. Mortgage debt slid after the financial crisis a decade ago but is rebounding.”

There is also the ballooning student debt that has topped $1.5 trillion last year. This inequality has a political cost. Some have attributed political dysfunction in the US and abroad to this distressing economic picture.

“American workers built this country into what it is today and they deserve to be recognized and fairly compensated for their effort,” said Imad Hamad, AHRC Executive Director. “On this Labor Day we salute the sacrifices of all workers and stress the importance of dealing with the crisis of the increasing income inequality,” continued Hamad.
Dear author,