Hamad to Detroit News: “The sign is a sarcastic message about Donald Trump judging the Arab and Muslim community without understanding what it’s about,” 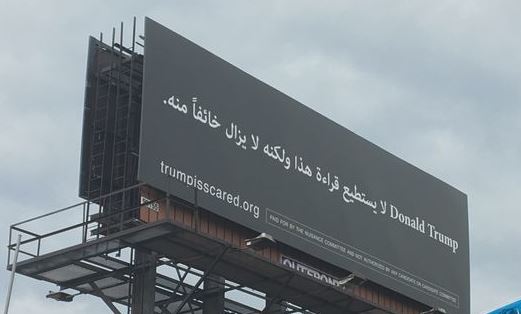 A billboard at Interstate 94 near the Detroit-Dearborn border reads, in Arabic: “Donald Trump, he can’t read this, but he is scared of it anyway.”(Photo: John T. Greilick / The Detroit News)Buy Photo

A group that taps humor and risque comments in a popular card game is reaching out to Metro Detroiters with a serious message via old-school advertising.

The Nuisance Committee, based in Chicago, recently placed an anti-Donald Trump billboard along westbound Interstate 94 near Dearborn. It’s expected to stay up through Election Day.

Written mostly in Arabic, the sign reads: “Donald Trump, he can’t read this, but he is scared of it anyway,” according to Kitty Kurth, spokeswoman for the Nuisance Committee, which was started by founders of the game Cards Against Humanity.

“It’s tongue-in-cheek with a serious message behind the comedy.”

The billboard was placed near Dearborn because of its large Arab-American population, according to the committee. The Republican presidential nominee has come under fire for his comments regarding Muslims. Another reason is that Michigan is a key swing state.

“Those were the two major factors that impacted our decision,” said Melissa Harris, spokeswoman for the committee.

Dawud Walid, executive director of the Michigan chapter of the Council on American-Islamic Relations, said he sees the humor in the Dearborn billboard.

“I chuckled,” said Walid, recalling the first time he saw it. “I laughed. Duh. This is how people feel in the community. It’s mocking Trump. It’s funny yet very appropriate considering the nonsense Donald Trump has continued to say about Muslims.”

Tim Lineberger, Michigan communications director for Trump, said Monday night he did not have an official statement regarding the billboard.

The billboard is among a few the committee has placed around the country, including one in Chicago that reads: “If Trump is so rich how come he didn’t buy this billboard?” and directs people to trumpdoesntpaytaxes.com. Another billboard in Orlando shows a cartoon likeness of Trump sitting at a computer and states: “Donald Trump Mains Hanzo and complains about team comp in chat.” For those that aren’t hip to gamer lingo, Harris said the billboard means that Trump only plays one character (in this case Hanzo, a non-versatile character from the game “Overwatch”). The billboard directs people to trumpisnotateamplayer.com.

“One of the reasons we’re using some unconventional ways to talk about the election is to reach out to younger voters who might not be focusing on the more conventional ways,” Kurth said.

The black-and-white billboard in Dearborn directs people to trumpisscared.org. It cost $4,850 to erect the billboard, Harris said. Funds are raised through sales of Hillary Clinton and Donald Trump card packs from Cards Against Humanity’s America Votes website.

There are more ad campaigns on the way through Election Day, so stay tuned, Kurth said.

“We’ve got our fingers in a lot of pots, stirring things up,” she said.

The group does not have any pro-Clinton campaigns but the group has been verbal in its support of the Democratic presidential nominee.

“We very much support Hillary Clinton, and we think she’s a great candidate,” Harris said. “We think she’s experienced. We think she’s qualified. We trust her with the country’s nuclear weapons. We’re not worried about her controlling the button so to speak.”

Walid said the anti-Trump sentiment on the billboard is felt by a vast amount of Arab-Americans and Muslims in Metro Detroit.

“It is stating a feeling … that Donald Trump has been a fearmonger about communities he really doesn’t know,” Walid said. “What I’ve been hearing on the streets of Detroit and Dearborn … I have not spoken to a person yet that they’re going to vote for (Trump) in this upcoming election. The general statements are he’s just a racist bigot and not just against people of the Islamic faith, but he made comments against Latinos and women.”

Nabih Ayad, founder of the Arab-American Civil Rights League, said he has not seen the sign, but said he believes it is a stand against bigotry and hate. He said its placement near Dearborn is appropriate.

“It’s obviously targeted to the Arab and Muslim community,” he said. “It’s a call for unity in that we will not take the political rhetoric that is happening here. We’ve been at the ground zero of hate and rhetoric since 9/11. We’ve seen over and over the rhetoric does not stand. Americans have to choose bigotry or unification. We are a nation of immigrants. We cannot forget that.”

Imad Hamad, longtime activist for the Metro Detroit Arab and Muslim community, and president of the American Human Rights Council, offered his take on the sign Monday.

“The sign is a sarcastic message about Donald Trump judging the Arab and Muslim community without understanding what it’s about,” he said. “This says, ‘You can’t read it because it’s a strange language, but you’re still scared of it; you hate what you don’t understand.’ That’s the message of this billboard. They’re trying to showcase his ignorance of not knowing the truth about Islam, Arabs, and our heritage. You don’t know it, but you fear it.”

Hamad said, however, there are some members of the local Arab, Muslim community who support Trump.

“But Mr. Trump does have some support in the Arab and Muslim community,” he said. “Not much, but it’s visible. These people feel Mrs. Clinton is not presenting a compelling case to vote for her.”