Rosa Parks Day, Civil Rights legend to be honored with a statue in Montgomery, Alabama 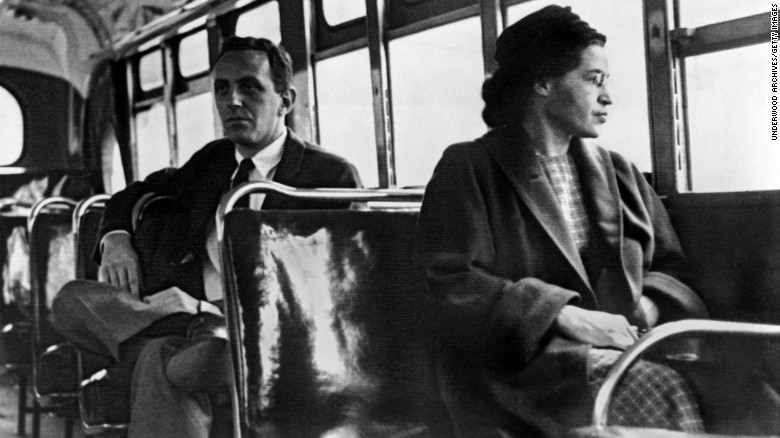 Sunday marks the second annual Rosa Parks Day in Alabama, after the state legislature approved the day honoring the civil rights icon last year.
Events were slated to take place throughout the city of Montgomery this weekend, including the dedication of a statue of Parks on Sunday afternoon.
Rosa Parks was on her way home from work on December 1, 1955, when she refused to give up her seat on a public bus for a white man.

Rosa Parks became one of the major symbols of the civil rights movement after she was arrested in Montgomery, Alabama, for refusing to give up her seat to a white passenger in 1955. For 381 days, African-Americans boycotted public transportation to protest Parks’ arrest and, in turn, segregation laws. The boycott led to a Supreme Court ruling desegregating public transportation in Montgomery. In this photo, Parks rides the bus a day after the Supreme Court ruling in 1956.

Her subsequent arrest prompted the 381-day boycott of the Montgomery bus system, organized by the Rev. Martin Luther King Jr.
A later ruling by the Supreme Court desegregated public transportation in Montgomery, but it wasn’t until the 1964 Civil Rights Act that all public accommodations were desegregated nationwide.
Her small act of defiance made Parks a major symbol of the civil rights movement. She died in 2005 at the age of 92.

“It is also not possible to overestimate the role that Rosa Parks played in making the US live up to its promise of equality for all,” said Imad Hamad, AHRC Executive Director.