ROHINGYA AND THE THREAT OF GENOCIDE in BURMA: 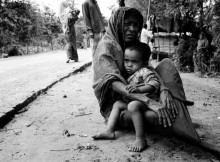 The American Human Rights Council (AHRC-USA) joins the world’s human rights community in condemning Burma’s government systematic and organized ethnic cleansing crimes against its Muslim minority. Burma’s government denies them basic rights including but not limited to the right to citizenship. Burma’s Muslims compose about 5% of the total population.

Burma’s Muslims are subject to brutal and horrific crimes that have lead to major destruction of villages, towns and neighborhoods over the past few years. Thousands of innocent lives including elderly, women, children and even infants have been lost. Over 150,000 Muslim Burmese have become homeless and/or displaced. These displaced people are placed in camps under the UN’s emergency relief coordinator where humanitarian aid workers are often denied access to these camps or have been exiled seeking refuge in neighboring countries. It is a systemic genocide being committed in Burma while the world watches.

The Burmese Muslims continue to be subject to a campaign of demonization. The United Nations has condemned the crimes against them but, unfortunately, no serious efforts have been done in order to help save the Rohingya. The Economist magazine has rhetorically asked whether the Rohingya are “the most persecuted people on Earth” stating that “Myanmar’s Muslim minority have been attacked with impunity, stripped of the vote and driven from their homes. It could get worse.”

AHRC calls upon the United Nations as well as the US administration to spare no effort to help stop the genocide against the Muslim minority in Burma.

“We are shocked at the magnitude of oppression the Muslim Burmese are subject too. It is unconscionable that the world is allowing the process of destruction of the Burmese Muslim community to continue unabated,” stated Imad Hamad, AHRC executive director.