Condolences to Dr. Opada Alzohaili, family and community at large: 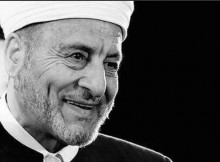 The American Human Rights Council (AHRC-USA) expresses its heartfelt condolences to Dr. Opada Alzohaili, AHRC president, his family and the community at large for the passing away of his beloved father Sheikh Wahbeh Alzohaili. Sheikh Alzohaili died peacefully in Syria yesterday among his family and love ones.
“Surely, God takes what His, and what He gives is His, and to all things He has appointed a time. May Allah forgive him and be merciful to him” said Imam Mustapha Elturk, AHRC Executive Board member. “Indeed, the nation “Ummmah” lost a giant of Islamic juries” continued Imam Elturk.
Dr. Wahbeh Alzohaili was a renowned and highly -respected Muslim scholar that the Arab and Muslim world will dearly miss in the current turmoil and upheaval. Sheikh Alzohaili was a prominent and vocal Muslim voice of reason and moderation through his long years of service at the local, national and international level. He was acknowledged as an important voice for mutual coexistence and mutual respect, tirelessly advocating for peace and love as a common bond among all humanity. Sheikh Alzohaili teachings, writings and academic work were great contributions to the great Islamic tradition. Sheikh Alzohaili left behind a treasure of great Islamic studies and researches that was translated to different languages. Sheikh Alzohaili’s legacy of scholarship, kindness and enlightenment will live for generations.
” Through his long years of service, he was a solid fighter, progressive thinker and unwavering defender of the true  essence of the Muslim faith” said Imad Hamad, AHRC Executive Director.
The AHRC board of directors, employees, supporters and volunteers join the Arab and Muslim American community in the USA as well as the rest of the world in mourning the death of Sheikh Alzohaili. AHRC’s entire family extends its sincere condolences to Dr. Opada praying for God to give the family the strength to cope with this loss. “Inna lillahi wa inna ilayhi raji’un,” surely we belong to Allah and to Him shall we return.
Funeral Services:Funeral services will be held on Tuesday, August 11, 2015 at 8:00 pm at The Muslim Community Mosque (MCM) located at 35700 West 12 Mile Road (12 Mile and Drake) in Farmington Hills.