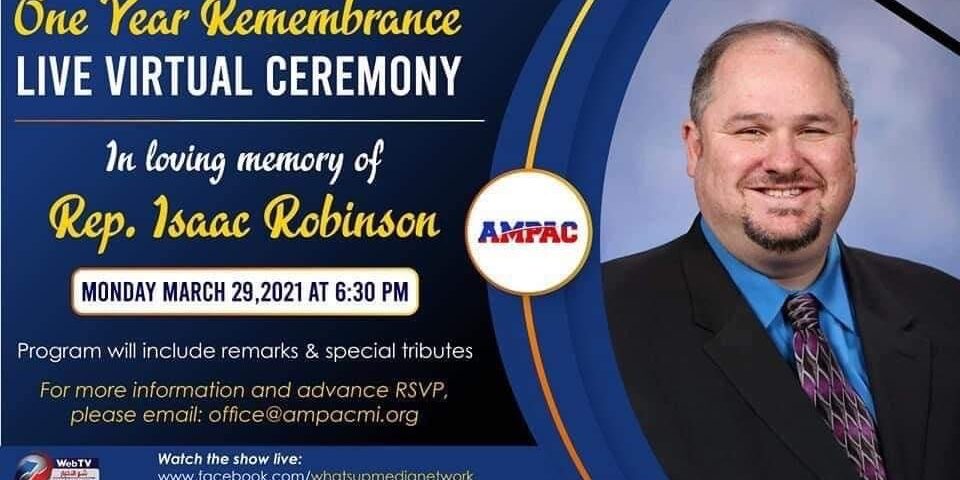 [Michigan, March 29, 2021]: The American Arab & Muslim American Political Action Committee (AMPAC) in Michigan, will be holding a Tribute honoring the life and legacy of the late Rep. Isaac Robinson who died on March 29, 2020 due to Covid-19 complications.

The one- year anniversary virtual remembrance will be aired live today, Monday 29, 2021 at 6:30 p.m. via social media. The event is open to the public. Use the following links to watch the show:

This is a tribute to honor the late Rep. Isaac Robinson who dedicated his life to public service. Isaac’s activism and engagement with all segments of our communities made him a role model for commitment to equality for all and social justice. Isaac’s strong involvement and partnership with the Arab and Muslim American communities at large will be remembered for years.

We urge all to join us tonight celebrating Isaac’s life and remembering him.

During this first annual remembrance & memorial AMPAC will make a special announcement to honor Isaac’s activism and service to people of all colors, races, and nationalities. AMPAC will be producing a book as a tribute honoring Isaac so his unique model of activism can be remembered.

“Isaac was a true partner to AMPAC and the community at large,” said Mr. Abdallah Sheik, AMPAC’s President. “An honorable man whose legacy continues to inspire us,” continued Mr. Sheik.

“We called the Honorable Mr. Isaac Robinson by his first name, Isaac,” said Imad Hamad, AHRC Executive Director. “This is because he was our friend, a genuine humble man who thought of himself as a public servant first and foremost, he hated formalities,” added Hamad. “I consider his early death a personal loss,” concluded Hamad.

Dear author,
Your story is published and below is a link to the publication
http://www.thenigerianvoice.com/news/297372/reminder-today-virtual-remembrance-tribute-for-rep-isaac.html

Help AHRC Protect Human Rights:
These are challenging times. It is our common humanity that we are determined to protect. To donate, please visit: www.ahrcusa.org for safe & secured donation