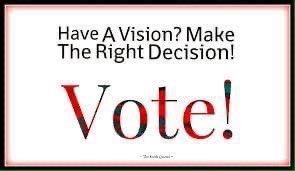 [Monday, August 3, 2021]: The American Human Rights Council (AHRC-USA) urges all registered voters to participate in the upcoming primary elections that will be held on Tuesday, August 3, 2021 across the state of Michigan.

This year’s primary elections is extremely important to different key cities such as Detroit, Dearborn, Dearborn heights, Taylor, Westland, Hamtramck and several others. Voting has already started via mail, absentee or in person, since June 21 and will continue to the day of the primaries on August 3rd.

The city of Dearborn’s mayoral race is the most heated one among all other races. Mayor O’Reilly’s retirement has opened the door for a number of candidates to run for mayor. There are seven strong candidates running. One thing is sure: The voter has many options to choose from.

We continue to advocate the Smart Vote. A smart vote is not reactive or emotional. We call on voters to refuse to be misled by misinformation and orchestrated campaigns of character assassination.

AHRC urges all voters in Dearborn and all other cities to vote. Don’t let a small group of voters determine the future of our cities. While national elections get all the hype, most of our day-to-day life is governed by local officials. Local elections are very important- think of schools, police and taxes, among other things.

The vote is not about race, ethnicity or faith. It’s about character, experience, qualifications, leadership and vision. Vote for candidates who are to serve the public honestly. Public service is a huge responsibility and not a privilege.

Your vote counts. AHRC urges all registered voters to vote and encourage friends and family to vote. Many races in the US have been determined by a small number of votes- sometimes fewer than five votes. Do not miss being part of shaping the future of our cities. Vote on August 3rd.

“Ralph Nader said the most important political position is that of the citizen,” said Imad Hamad, AHRC Executive director. “In a democracy the voter decides the future of the local community, the state and the country and a single vote is the most amplified at the local level,” added Hamad. “Let’s make our voice heard,” concluded Hamad.

Dear author,
Your story is published and below is a link to the publication
http://www.thenigerianvoice.com/news/300750/michigans-primary-electionsaugust-3rd-charting-the-futur.html
https://www.pressandguide.com/2021/08/02/ahrc-encourages-everyone-to-vote-aug-3/