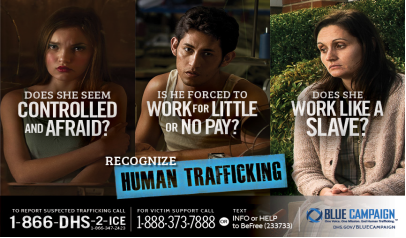 “The Department of Homeland Security is leading the fight against the horrific practices of sex trafficking and forced labor,” said Secretary Alejandro N. Mayorkas. “As part of the Department’s victim-centered approach, we are committed to providing victims of these crimes, including noncitizen victims, support and necessary services and to seeking justice on their behalf. Components, offices, and experts across the Department are part of this critical mission. With the release of these new resources, we aim to support and inform law enforcement and businesses across the country, and to protect and assist victims of trafficking.”

DHS is also releasing a fact sheet informing individuals and entities engaged in business in China of the risk of violating federal forced labor law. This advisory cautions businesses that they are responsible for the labor practices in their supply chains and informs them of the federal laws for prosecuting forced labor and related offenses. The fact sheet explains that one can face prosecution in U.S. courts and states that, “The federal crime of forced labor does not require that a defendant have imported into the United States any goods produced wholly or in part with forced labor.”

DHS is also home to the national public awareness campaign, the Blue Campaign. The Blue Campaign educates the public, law enforcement, non-governmental organizations, and other stakeholders through partnerships, advertisements, and social media about the indicators of human trafficking and how to report it.

Any victim of a federal crime, or a whistleblower or witness to a federal crime, may contact HSI by calling 866-347-2423 or completing a tip form here. A crime victim’s identifying information is protected from disclosure. HSI has Victim Assistance Specialists who can inform crime victims of their rights and ability to receive benefits and services. Informants may remain confidential and may be entitled to compensation, such as a Moiety award. The criminal authorities for enforcing forced labor fact sheet can be found here.
Learn more about the DHS Center for Countering Human Trafficking here ( https://www.ice.gov/features/ccht ).
Learn more about the DHS Blue Campaign here (https://www.dhs.gov/blue-campaign ).

Help AHRC Protect Human Rights:
These are challenging times. It is our common humanity that we are determined to protect. To donate, please visit: www.ahrcusa.org for safe & secured donation
# # #
AHRC News & Views
Media & Information: (313) 9143251
NGO in Consultative Status with the Economic and Social Council (ECOSOC of the United Nations