ISRAELI MINISTER CALLS FOR THE “BEHEADING” OF “ DISLOYAL” PALESTINIANS WHO ARE CITIZENS OF ISRAEL: 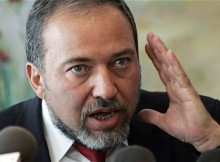 AHRC strongly condemns the Israeli Foreign Minister Avigdor Lieberman’s remarks calling for the “beheadings” of what he described as disloyal Arab Israelis.  Beheading has arisen lately as ISIS terror tactic in committing horrific crimes against humanity.  Minister Lieberman’s record speaks for itself as to promoting hatred and advocating for racism against Israel’s Palestinian Arab minority that constitutes 20% of Israel’s population and is often referred to as “Israeli Arabs.”

Discrimination against the Arab citizens of Israel is a well- known reality but the hateful comments of Minister Lieberman has raised the hate to a knew level by threatening the use of the tactics of the most notorious terrorists of our time. Israeli society is growing and contributing to the escalation of conflict inviting violence and counter violence.   The latest attack on  member of Knesset, Israeli parliamanet, Hanin Zobi, is another simple example of the fruits of hateful rhetoric.  AHRC condemns any act of hate and any form of bigotry against any human being.

“The hateful comments made by Israeli Minister Lieberman are disturbing and are condemned in the strongest words. Such hateful rhetoric is bound to increase the discrimination against the Palestinian citizens of Israel and expose them to more hate crimes,” stated Imad Hamad, AHRC Executive Director.