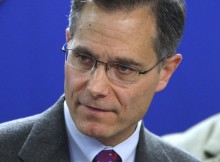 The American Human Rights Council (AHRC) wishes speedy recovery to the US District Court Judge of the US Eastern District Court in Michigan the Honorable Terrence Berg who was the victim of a robbery attempt outside his residence in Detroit.

Judge Berg was shot in the leg and is expected to recover soon. The FBI declared a $25,000 reward for any information that may lead to the arrest and conviction of the perpetrators.   Crime in Detroit is caused by a number of chronic social, economic, and by historical factors. It continues to be a serious challenge for those who live and/or conduct business in Detroit.  It’s a basic human right for people to live in a safe environment and have a stable social and economic situation. Dealing with the root causes of crime requires a comprehensive effort that is not solely focused on law enforcement.

It is heartening that, despite the personal tragedy, Judge Berg’s wife, Anita Sevier, has alluded to these issues. Sevier told WWJ-AM radio in an interview that she “feel[s] badly that somebody felt that they needed to do this. I feel for people that don’t have something else to be doing. I’m sorry that this has to happen.” The Detroit News reported that the Berg family “had lived in the neighborhood for 26 years and considered it safe and friendly.”

“We wish Judge Berg a speedy recovery” said Imad Hamad, AHRC executive director. “Crime in Detroit is a challenge to the citizens of Detroit and no one is immune. We hope that efforts to alleviate the chronic social and economic problems remain key elements in any crime fighting effort.” continued Hamad.