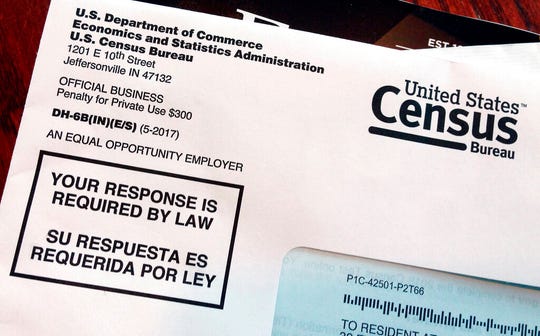 It is often said that in a democracy, it doesn’t count unless it can be counted: votes, people and money. Now that we won the battle to count everyone by removing the citizenship question it is time to spare no effort to make sure everyone is counted. Participation in the 2020 census count should be taken extremely seriously. It is arguably even more important than local, state and national elections since we have to live with the results and consequences for 10 years.

The census is simply about us, the people of the United States, regardless of legal status, Hamad writes. (Photo: Michelle R. Smith, AP, File)
This is neither a partisan issue nor an ideological one. The Constitution requires a census every 10 years. The current administration tried unfortunately to politicize the census by attempting to add a citizenship question. While this looked harmless at face value, nonpartisan professionals said that it would have reduced participation in the census, thus producing less reliable numbers. The most vulnerable communities would have been under-counted. Therefore, the human rights community fought to keep this question out. And the U.S. Supreme Court, despite its ideological tilt, stated the reasons offered by the administration for adding the citizenship question were unconvincing.

We urge everyone to spare no effort to ensure the success of the census. Success means counting everyone. And everyone means everyone. It is not a debatable issue. The census is simply about us, the people of the United States, regardless of legal status.

These numbers will shape each village, city, county and state. They will mean adequate resources allowing local and state authorities to serve well their populations. They will mean seats in the House. No one should be shortchanged.

We trust the U.S. census and its employees and contractors. The employees on the ground are from our communities and are dedicated to count the people. They are not law enforcement or immigration officers. Many of them have census work as a temporary seasonal job. The people that work with the data are civilians trained in the social sciences.

The current administration tried unfortunately to politicize the census by attempting to add a citizenship question, Hamad writes. We realize that the fears are grounded in the rhetoric and actions of American politicians. Immigration is used as a political football. The courts have stopped politicians from achieving their goal of politicizing the census. Now, let’s make sure all are counted.

Your story is published and below is a link to the publication
http://www.thenigerianvoice.com/news/281412/now-that-citizenship-question-is-settled-lets-all-be-count.html