ERASE THE HATE. ANOTHER CRIME IN DALLAS. 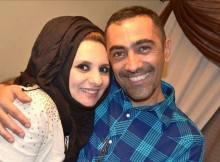 The American Human Rights Council (AHRC-USA) expresses its sincere condolences to the Al-Jumaili family for the death of Ahmed Al-Jumaili who was murdered in Dallas, Texas on March 5, 2015.

Ahmed was another victim of a cold- blooded murder and ignorance that claimed his life while he was trying to enjoy the “snow” outside of his residence when two murderers fatally shot him.   Ahmed leaves behind his wife Zahara in Texas and his mother in Iraq.

Ahmed’s dream of leaving turbulent Iraq and pursing the American Dream was cut off shortly after he arrived to the US three weeks ago. This murder is added to a list of violent crimes committed that possibly motivated by hate.

AHRC asks that the Dallas Police Department and the law enforcement authorities and conduct a thorough and transparent investigation of this vicious crime. AHRC salutes the DPD in Texas for reaching out to the community addressing this unfortunate crime.

“Our thoughts and prayers are with the Al-Jumaili family. The reality is that incitement is bound to create discrimination and violent crime” said Imad Hamad,  AHRC Executive Director. “We call on all fellow Americans who value diversity, tolerance, and basic decency, to have their voice heard in condemning all kinds of hate mongers and violence” continued Hamad