AID WORKER WHO DIED IN MIDEAST HONORED IN DEARBORN 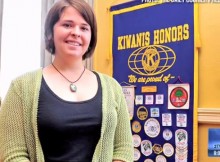 AID WORKER WHO DIED IN MIDEAST HONORED IN DEARBORN

Dearborn — Kayla Mueller considered helping others to be her life’s work.

The Arizona resident who was held hostage by Islamic State militants and whose death in captivity was confirmed this year volunteered in HIV clinics and women’s shelters as well as worked with humanitarian efforts abroad, relatives said.

Before her 2013 kidnapping in the Middle East, she joined a group supporting Syrian refugees in Turkey.

That passion to serve regardless of circumstance demonstrates why the young aid worker was an exemplary humanitarian and inspiration for others in Metro Detroit and worldwide, her family said Friday.

“One person of extreme faith, extreme compassion and extreme courage can make a difference in this world,” her father, Carl Mueller, told members of the American Human Rights Council.

The Dearborn-based nonprofit presented a Special Humanitarian Tribute of Honor to the family of Mueller. Kayla Mueller’s life story and work were a highlight of the council’s first semiannual fundraising dinner, “Protecting our Humanity,” which drew an estimated 500 to Byblos Banquets in Dearborn.

Mueller’s parents, Carl and Marsha, accepted her award and said they plan to continue her work through Kayla’s Hands, a nonprofit foundation.

In an emotional acceptance speech, Marsha Mueller said her daughter preferred to avoid the spotlight and instead shine it “on the anguish and suffering in this world.”

“Please, when you think of Kayla, think of the good she brought to this world,” Mueller told the crowd. “Help us carry on Kayla’s legacy through sowing seeds of compassion, kindness and peace.”

Throughout the event, which aimed to support the council’s efforts, local leaders and activists stressed defending human rights and boosting causes to improve conditions for everyone.

Injustice and hatred “is really a threat for everybody,” said Dr. Opada Alzohaili, president of the council. “As a human being, whatever background … it is of interest to us to get rid of all this hate and protect human rights.”

Others at the dinner discussed issues for groups of people across the state and elsewhere.

State Rep. Fred Durhal III, D-Detroit, called on other lawmakers to address problems that contribute to Michigan’s prison population. Citing statistics, he said a large number of inmates failed to finish high school, which suggests a need to invest more in education programs.

“To solve some of these challenges, we have to look at reasonable solutions,” he said. “We have to cut the school-to-prison pipeline.”

Several officials, including Wayne County Clerk Cathy Garrett and Anita Peek, executive director of the Rosa and Raymond Parks Institute for Self Development in Detroit, also presented commendations to the council or offered their support.

After the dinner, Mueller said others could follow her daughter’s example, even on a smaller scale.

“You don’t have to go overseas to do anything like that,” she said. “Smile … help someone at the grocery store. That was Kayla.”

Through Kayla’s Hands, Mueller said, she hoped to extend her daughter’s work and “squash some of the evil in the world.”

“She set an amazing example,” he said. “I don’t think I’ll be as brave as she was. It definitely opened my eyes.”