AHRC YOUTH & VOLUNTEERS IN ACTION SUPPORTING THE RELAY FOR LIFE: THE HUMANITY UNITS US. 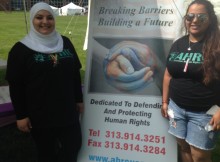 Onn Saturday, May 30, 2015 from 10:00 a.m.  to 10:00 p.m., The American Human Rights Council (AHRC) Youth members and volunteers joined over 41 teams and over 382 other active participants in support of the   Relay for Life annual event at the Ford Community and Performing Arts Center in Dearborn.  Despite the rain and relatively unexpected wind and cold weather, AHRC volunteers actively participated supporting this important humanistic cause by raising funds for the Relay for Life cause.

AHRC Youth Members managed to sell food and organize games and activities for those who visited the AHRC Tent. Donations raised will be allocated to support research fighting cancer through Relay For Life project.

AHRC salutes all of the youths and student volunteers who worked this important event. AHRC expresses its great appreciation to all members who helped in making this event a success, especially the donors Captain Jay’s Fish & Chicken, Al-Noor Hot Dogs and others.