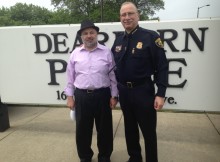 Today, Monday, June 1, 2015 at 11:00 am, the American Human Rights Council (AHRC) joined the Dearborn Police Department “Youth Drivers/Summertime Traffic Issues” media event encouraging Safe Driving.   According to a DPD release issued on May 19, 2015, Motor vehicle crashes are the leading cause of death among American teenagers, killing between 5,000 and 6,000 children and young adults every year among them 23 percent are drivers under 21 years of age.

All speakers stressed the importance of driving safe without distraction especially among the young and the youth. Speakers urged parents to be the lead by example and not to take the fault of their children while driving lightly.

“Drive safely to avoid Tragedy. Nothing is more precious that the human life” said Hamad.  AHRC Executive Director.  “Parents as well and the young should avoid distractions when driving.  Sometimes it is a matter of seconds between life and death,” continued Hamad.

AHRC commends the DPD, its leadership, and its partners on this valuable effort. The right to life is the most important human right and all efforts to save lives advance human rights of all. Nothing is more valuable and more precious than the lives of our youths.  Saving human lives through education and awareness is key to avoid possible tragedies.