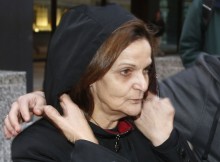 [Michigan. December 10, 2014]: The American Human rights Council (AHRC) welcomes the release of the Palestinian- American leader Rasmea Odeh after being detained on November 10, 2014 when the federal grand jury found her guilty on immigration fraud. Immediately after the jury verdict, the government demanded that her bond be revoked and the Court approved it. Ms. Odeh’s detention was a shock to the Arab and Muslim American community at large and to the civil and human rights groups since Odeh poses no security threat and is not a flight risk. During her detention, Odeh had to endure more than two weeks in solitary confinement- an extreme and extra ordinary measure that is totally unjustified. Ms. Odeh is 67 years of age and suffers from multiple health problems that were worsened by her imprisonment. On Monday, December 8, 2014, US District Judge Gershwin Drain approved the legal defense team request for release of Odeh on bond pending the upcoming sentencing hearing scheduled on March 10, 2015. AHRC as it welcomes this temporary relief from the Judge and appreciates it, it continues to express its serious concerns regarding the proceedings in this case.  Unfortunately, this case smack a classic case of “selective prosecution” that may be “politically” motivated. AHRC hopes that such a positive step will lead to a just  and fair outcome for Odeh. AHRC will continue to closely monitor this case closely due to its significant effect on the environment for human rights advocacy and the community at large. “We can only hope and pray that Ms. Odeh will be vindicated at some point by the American legal system,” said Imad Hamad, AHRC Executive Director.