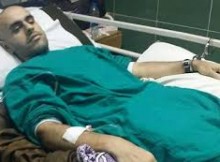 [Michigan, December 10, 2014]: The American Human Rights Council (AHRC) demands the immediate release of Mr. Mohamed Soltan, Soltan is a 26 years old an American citizen and a graduate of Ohio State University. He is one of many political prisoners in Egypt who have been detained and imprisoned since August 25, 2013 without being subject to neither formal judicial proceedings nor any filing of formal charges against him. Mr. Soltan may face imminent death if not released immediately or provided the proper and adequate health care treatment he needs. According to reports and Mr. Soltan’s family, Soltan’s health seriously deteriorated threatening his life and wellbeing where he fell unconscious for over 20 minutes. When he regained consciousness and was rushed to urgent car he temporarily lost the ability to remember anything not even the names of immediate family members. Soltan was later transferred to Qasr Al Aini Hospital.  AHRC joins other human rights organizations in the nation and abroad in calling for Mr. Soltan’s immediate release.  AHRC calls upon the U.S. State department and President Obama to help secure the release of Mr. Soltan and to assure his safety and to secure his immediate release.  Mr. Soltan’s basic human rights must be protected and fully respected. “Mr. Soltan’s situation is very alarming and requires immediate action before it is too late” said Imad Hamad AHRC Executive Director. “We call upon our State Department to accelerate its efforts to save Mr. Soltan. Time is of the essence” continued Hamad.