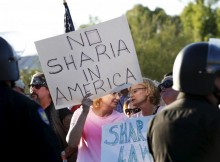 The American Human Rights Council (AHRC-USA) joins all peace- loving Americans and interfaith leaders in urging members of the Muslim American community to practice caution, patience and calm in dealing with the anti-Muslim armed protesters who are planning rallies at mosques and community centers across the US in states that include Georgia, Arizona, Michigan and in other “open carry” states. Among the expected protest cities in Michigan is the city of Dearborn, a city that is known for its highly visible and successful Arab & Muslim American community.

The bigoted anti-Muslim protests are deceptively named “Global Rally for Humanity” protests and are expected to be held on Friday October 9 and Saturday October 10. The anti-Muslim protesters have called their ‘fellow patriots, veterans, bikers, rednecks and good Ol’ boys to stand up for humanity that is being  attacked by what they called the “evil cult”  Islam,  and to end the invasion of Muslim colonization and to protest the “Islamic Shariaa Law” in America.’  According to media and law enforcement agencies, the protesters are expected to be armed.  Organizers of these anti-Muslim protests have called on those joining the protest to bring their weapons and practice their right to bear arms openly.

AHRC respects the first amendment and the right to peacefully protest. However, we believe that the protesters are misguided with their intention to intimidate Muslim Americans and create an environment of hate, intimidation and insecurity.  AHRC calls upon members of the “targeted communities” to exercise calm and not to respond to possible efforts by the anti-Muslim protesters to provoke Muslim Americans. AHRC stresses that ignoring these protesters is the safest way of dealing with them since the protests are meant to create a media scene and a crisis. AHRC trusts that law enforcement at all levels are fully capable of addressing this situation and are ready to protect the rights of all residents and citizens of our country.  AHRC urges all to work closely with the authorities in case of any incident and not to take matters into their own hands.

“ Today we see hate and bigotry, from many sources, directed at Muslim Americans,” said Imad Hamad, AHRC Executive Director. Intolerance and hate is the same whether it is directed at Jewish Americans, Latinos, African Americans or any other minority in this country” said Imad Hamad, AHRC Executive Director.  “The hateful protesters do not represent the America that we know and love- the country that celebrates diversity, tolerance and inclusion. We have full faith and trust in our law enforcement agencies, especially the local police and the FBI, that they will make sure that law and order prevails and that the rights of Muslim Americans are protected,” added Hamad.