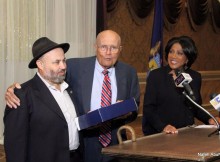 The American Human Rights Council (AHRC-USA) team is wishing former Congressman John Dingell a speedy recovery.     John Dingell, the longest serving Dean in the history of the US Congress and one of greatest public servants in the history of Michigan, had a successful medical procedure inserting a bi-ventricular pacemaker on Thursday.