AHRC strongly condemns the targeting of civilian evacuees in Syria: 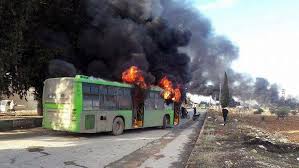 The American Human Rights Council (AHRC-USA) condemns in the strongest terms the recent bombing that targeted a convoy of innocent civilians fleeing the besieged towns of Al-Foua and Kfraya, outside the city of Aleppo, who were evacuated as part of mutual agreement between the warring parties in Syria .

The vile and criminal attack claimed over 126 innocent lives, most of them are children. This horrific attack comes a week after the chemical attack that killed over seventy people, among them children and babies on April 4, 2017.

There is no justification whatsoever to the targeting of civilians during violent conflict. The targeting of the convoy of evacuees is a war crime and is condemned. AHRC continues to call for the UN and world powers to put an end to the conflict in Syria. The Syrian war has resulted in hundreds of thousands of dead and millions of refugees and displaced people.

“AHRC condemns violations of human rights regardless of the identity of the victims and the identity of the perpetrators,” said Imad Hamad, AHRC Executive Director. “The images of the dead evacuees should shock the world into action that ends the Syrian conflict,” said Hamad.