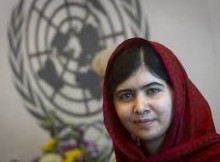 [Michigan, October 30, 2014]: The American Human Rights Council (AHRC) salutes Ms Malala Yousafzai,  a 17 years old teenager from Pakistan and a winner of the Nobel peace Prize for education  this year, who recently donated the entire award money she received to help rebuild the destroyed and damaged Palestinian schools in Gaza during the last Israeli assault on Gaza few months ago.  Malala donated her $50,000.00, a large sum of money for any teenager let alone a teenager from Afghanistan, to the United Relief Nations & Works Agency (UNRWA) the agency that facilitates, manages and administers the schools in Gaza.   Gaza schools host over 250,000  students. Malala, through her generous gesture is another example of human compassion for education as a basic human right to every person on earth and the right of every child for education within a safe and secure environment  free of war, fear and occupation. Even though Malala comes from the poor country of Pakistan, she chose to donate her award to Gaza to demonstrate her commitment to the Palestinian struggle for dignity and human rights. Malala chose to invest her money in the future of Palestine.

AHRC is honored to recognize Malala as a generous champion of education, children’s rights, and a supporter of the Palestinians.

“ Malala’s generous gesture represents the living hope and living conscious of this world. It shows how humanity unite us”  said, Imad Hamad, AHRC Acting Director. “She is a role model that helps us see light despite all the darkness around us. Despite the dire needs of Pakistan, Malala chose to donate to Palestine. This shows compassion, empathy and human rights are not limited by borders”, continued Hamad.