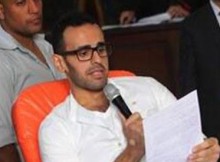 [Dearborn, Michigan- October 23, 2014]: The American Human Rights Council (AHRC) expresses its serious concern regarding the wellbeing of Mr. Mohamed Solltan, 26 years of age and one of many ‘political” prisoners in Egypt. According to Mr. Soltan’s family, friends and number of human rights organizations and media reports, Mr. Soltan may face imminent death if not released immediately  and provided the proper and adequate health care treatment he needs. He has been on a hunger strike as a cry for justice denied and as an effort seeking freedom for himself and many other activists and peaceful protesters who are being subject to the same injustices.

An American citizen and a  graduate of Ohio State University,  peace activist  Mr. Solltan was arrested since August 25, 2013  by the Egyptian authorities without being subject to any formal judicial proceedings nor any filing of formal charges against him.

AHRC joins other human rights organizations in the nation and abroad in calling for Mr. Soltan’s immediate release. AHRC is appalled that Mr. Soltan has been denied the most basic of due process rights. Holding Mr. sultan for over 15 months without any formal proceeding is a blatant violation of Mr. Soltan’s very basic and elementary human rights.  AHRC calls upon the U.S. State department and President Obama to help secure the release of Mr. Soltan and to assure his safety as well as his basic human rights.

On November 16, 2013,  Mr. Mohamed Soltan wrote a direct letter to President Obama asking for assistance, he said: “For months, every day I woke up thinking: “Today is going to be the day Americanness counts. Today will be the day those promises my president made me will materialize, today will be the day the Egyptian authorities will have no choice but to treat me like a human being. As of today, my 26th birthday, I am no longer that naïve kid who once believed in those promises and hopes that you will come through in my time of desperate need. Unfortunately, where there once was hope and change now stands a dark underground cell. With only hope and trust in God. Mr. President, I can only ponder on your legacy… that could have been.” Please visit this link to read the full letter.http://thelede.blogs.nytimes.com/2014/01/24/letter-to-obama-from-american-detained-in-egypt/?_php=true&_type=blogs&_r=0

AHRC is deeply troubled with the situation in Egypt as to the rights of perceived opponents of the regime. The Egyptian government continues what seems like an incessant campaign of persecution of peaceful protesters through the use harassment, violence and discredited military tribunals.  As a UN member, Egypt has the legal obligation to respect the UN charter and the United declaration of human rights among other of Egypt’s international obligations.

“We call upon our State Department to accelerate its efforts to save Mr. Soltan” said Imad Hamad, AHRC Acting Director. “ Mr. Soltan’s situation is very alarming that require immediate action before it’s too late” continued Hamad.