AHRC REITRIATES ITS CALL FOR THE IMMEDIATE RELEASE OF BISHOPS YOUHANNA IBRAHIM AND BOULOS YAZIGI: 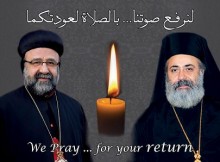 The American Human Rights Council (AHRC-USA) continues its call for the immediate and unconditional release of the two abducted bishops, Bishop Youhanna Ibrahim Syro-Orthodox bishop, and Boulos Yazigi, Greek Orthodox Bishop of Aleppo. The bishops were abducted in Aleppo, Syria on April of 2014. Since the time of their abduction very little information is available and efforts to negotiate their release were not productive. Clergy are servants of God who work to improve the lives of their congregants and should only be honored for their service. AHRC is deeply concerned about the fate of the bishops- human life is the most precious human right and any harm that might befall the two bishops is a harm that befalls all of us as human beings. According to news sources the bishops may still be alive and held in an area near the town of ‘Azaz, close to the Turkish border. The border area has experienced intense fights among a motley crew of groups that include militant and extremist groups.  The kidnapping of the two bishops is a toll of the Syrian conflict that includes hundreds of thousands of deaths, destruction of the country’s infrastructure and millions of displaced Syrians inside Syria as well as in neighbouring countries such as Lebanon, Jordan and Turkey. Indeed, the Syrian crisis is one of the most disturbing and most heart breaking across the globe. AHRC calls upon the international community to spare no efforts to help release the two bishops as well as to lend the Syrian people in Syria and outside the much needed humanitarian help. AHRC joins the world’s human rights community in calling for peace in Syria and the restoration of order, unity and prosperity.

“We are deeply concerned about the ongoing tragedy in Syria. Sadly, Syria has been transformed from a very peaceful and remarkably safe country to an extremely chaotic and dangerous part of the world. AHRC calls on the world to help end the vicious conflict, provide more humanitarian relief to the displaced Syrians and help release the abducted bishops,” stated Imad Hamad, AHRC Executive Director.