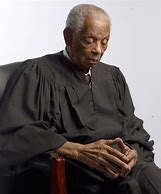 [April 28, 2019]: The American Human Rights Council (AHRC-USA) expresses its sincere condolences for the passing of the Hon. Federal Judge Damon Keith, one of the shining stars of the federal judiciary. He was a brilliant jurist and an incredible humanitarian.

In 1967, President Lyndon Johnson, appointed Judge Keith to the U.S. District Court for the Eastern District of Michigan. He served as chief judge of the district court. In 1977, President Jimmy Carter elevated him to the U.S. Circuit Court of Appeals for the Sixth District Court.
Judge Keith was a true champion of justice. His courage and his passion for justice reflected itself in his rulings.

AHRC expresses its condolences to his family and his loved ones, his judicial peers and all in the civil rights and human rights community. He will be always remembered and his legacy will live on to generations to come.
“Judge Keith was a true judicial icon and legend that so many will miss,” said Imad Hamad, AHRC Executive Director. “I had the honor to know him and we had the honor to recognize him years ago,” added Hamad. “He will continue to inspire lawyers for generations to come,” ” continued Hamad.