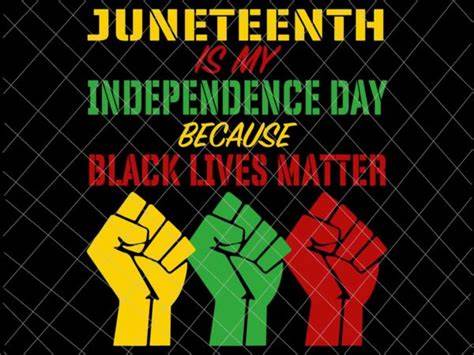 Juneteenth marks the end of slavery in the United States. Prior to federal recognition, it has been a holiday recognized by forty- eight states.

Juneteenth reminds us of one of the most painful periods in American history when African American were enslaved and denied the rights promised in the Declaration of Independence. Slavery was abolished only after a bloody Civil War that killed hundreds of thousands of people and caused so much destruction.

The suffering of African Americans did not end with the abolition of slavery. For many years, African Americans continued to suffer from de facto and de jure discrimination. Despite real and impressive improvements and legal protections, the struggle for justice and equality continues.

Juneteenth is a day to celebrate freedom. It is also a day to remember that the struggle for full equality is not over.

“Texas slaves did not “get the memo” that they were free. Never again will the “enslaved” be likewise uninformed. Knowledge IS freedom.” Said Atty. Allison Folmar, AHRC Advisory Board Member

“June 19, 1865, the enslaved living in Texas learned that President Lincoln freed the enslaved two years prior. Today the Black community walks around shackle-free, able to live where we choose (in most cases), marry freely, and raise a family. But I wonder if our minds are free from slavery”, said Dr. Nakpangi Thomas, AHRC Advisory Board Member.

“WE THE PEOPLE celebrate JUNETEENTH together today. It is the oldest nationally celebrated commemoration of the ending of slavery in the United States of America,” said Judge D. Morris, AHRC Advisory Member. “Yet, we all know that freedom from systematic racism remains a goal and as we continue to enjoy living in this great country, we must strive together to accomplish so much more” added Judge Morris. “Keep celebrating but, keep working towards achieving our best perfect union ever,” concluded Judge Morris.

“While we should celebrate the end of slavery and not forget our history, we must continue the fight against all forms of racism, including environmental racism and mass incarceration,” said Imad Hamad, AHRC Executive director. “The struggle for racial justice continues,” added Hamad.

“While we should celebrate the end of slavery and not forget our history, we must continue the fight against all forms of racism, including environmental racism and mass incarceration,” said Imad Hamad, AHRC Executive director. “The struggle for racial justice continues,” added Hamad.

Dear author,
Your story is published and below is a link to the publication
http://www.thenigerianvoice.com/news/299559/ahrc-joins-african-americans-and-all-peace-loving-people-in.html

Help AHRC Protect Human Rights:
These are challenging times. It is our common humanity that we are determined to protect. To donate, please visit: www.ahrcusa.org for safe & secured donation
# # #
AHRC News & Views
Media & Information: (313) 9143251
NGO in Consultative Status with the Economic and Social Council (ECOSOC)
of the United Nation