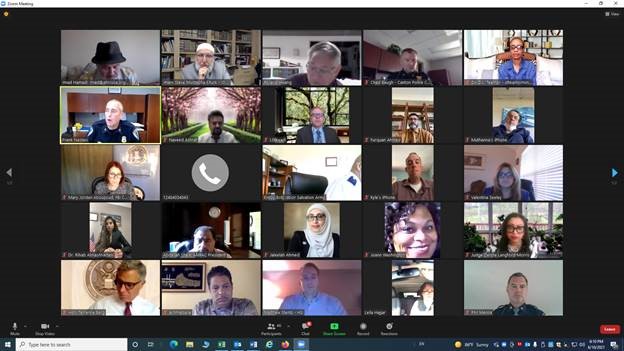 [Michigan, June 14, 2021]: Consistent with AHRC’s continued engagement efforts with law enforcement, on June 10, 2021, AHRC organized another successful round of discussion in partnership with the American Citizens for Justice (ACJ).

In a free society, law enforcement is largely limited to dealing with violence after it takes place. It is society’s task, in partnership with law enforcement, to come up with solutions that deal with the problem at the root. It’s a tough reality that domestic terrorism, acts of hate, mass-shootings and extremism are going to live with us and we have to be vigilant.

There is no magic solution. We know that our law enforcement is sparing no effort in carrying out its mandate for providing security. As members of the civil society, we see enhancing and advancing education, awareness and training as key to the process.

“It is frustrating to live in this vicious cycle of violence and condemnation of violence,” said Imad Hamad, AHRC executive director. “We believe that civil society-law enforcement engagement is vital to building trust and finding solutions,” added Hamad.

Help AHRC Protect Human Rights:
These are challenging times. It is our common humanity that we are determined to protect. To donate, please visit: www.ahrcusa.org for safe & secured donation
# # #
AHRC News & Views
Media & Information: (313) 9143251
NGO in Consultative Status with the Economic and Social Council (ECOSOC)
of the United Nations