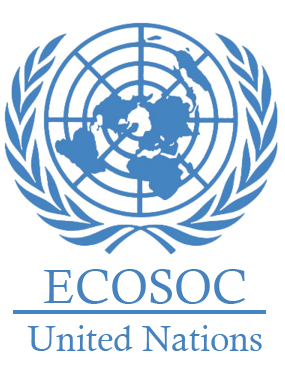 The American Human Rights Council (AHRC-USA) is gratified and truly honored to receive the United Nations- ECOSOC Consultative Status approved in its session held on July 24, 2018.  This recognition is important to the work of AHRC. The Consultative Status will enable AHRC to actively engage with the ECOSOC and its subsidiary bodies. This honor will advance the mission on human rights within the nonprofit 501(C)-3 status of AHRC.

The American Human Rights Council (AHRC) is dedicated to defending and protecting human rights as outlined in the U.S. Constitution and the United Nations 1948 Universal Declaration of Human Rights (UDHR). The AHRC was formed to protect these rights and advocate for all human being whose rights are being violated or denied. To that end, the AHRC will build a tenacious, objective, and carefully guided advocacy program that will serve to defend individual human rights, whenever and wherever they are being infringed upon. The granted status will enable AHRC to play more effective and productive role serving such goals.

The United Nations ECOSOC consultative status granted to the American Human Rights Council (AHRC) will enable AHRC to attend international conferences and events, submit written and oral testimony at the UN, organize side events at UN gatherings, and allow access to all UN sites in the world. This access will give AHRC the opportunity to network and provide input and make a difference on the issue of human rights on the world stage.

As a human rights organization, the UN Consultative Status will advance AHRC’s role to the monitoring and implementation of international agreements. As such, AHRC will serve as an early warning agent in the event there is a serious and immediate problem that needs addressing.

The Economic and Social Council is at the heart of the United Nations system to advance the three dimensions of sustainable development – economic, social and environmental. It is the central platform for fostering debate and innovative thinking, forging consensus on ways forward, and coordinating efforts to achieve internationally agreed goals. It is also responsible for the follow-up to major UN conferences and summits.

“AHRC takes great pride in obtaining such prestigious status that helps advance and empower its engagement with the United Nations,” said Dr. Ihsan Alkhatib, associate professor of political science at Murray State University and AHRC advisory board member. “AHRC extends sincere appreciation to the team members who worked diligently through this process, especially attorney London Bell for her leading efforts during her service with the AHRC,” added Alkhatib.

“The mission of the AHRC is human rights, we take all steps needed to advance our mission and our getting the United Nations NGO ECOSOC consultative status will help us greatly in making a difference on a global stage,” said Imad Hamad, AHRC Executive Director. “As we promised our friends and supporters, although we are a Michigan-based organization, our aim is national and international,” added Hamad. “This UN-affiliated status is a point of pride for us and we thank our friends, supporters and donors that have enabled us to further our mission and we promise them to continue to make them proud of AHRC and its work,” concluded Hamad.

Dear author, Your story is published and below is a link to the publication http://www.thenigerianvoice.com/news/269366/ahrc-honored-to-receive-the-united-nations-ngo-ecosoc-consul.html