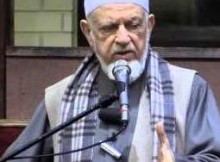 The American Human Rights Council (AHRC-USA) express its sincere condolences to Mr. Muthanna Al Hanooti, AHRC Board Member for the passing of his beloved father Sheikh Mohammed Ali Al Hanooti, who died yesterday June 3,2015  in the State of Virginia. Sheikh Al Hanooti, is a Muslim scholar and a renowned Muslim figure. He was highly respected among his Muslim peers and scholars in the USA and across the world as well as the Arab & Muslim American community at large.

“ Through his long years of service, he was a solid fighter, progressive thinker and unwavering defender of the true  essence of the Muslim faith” said Imad Hamad, AHRC Executive Director.

To view his most recent lecture that he delivered few days ago on May 29, 2015, please visit https://youtu.be/5XJ4uu4ApNU