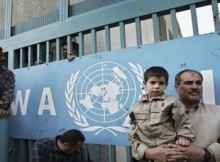 The American Human Rights Council (AHRC-USA) is very troubled by the news that the United Nations Relief and Works Agency for Palestine Refugees (UNRWA) may be forced to stop its aid to Palestinian refugees due to a financial crisis. UNRWA is a relief agency that provides aid to displaced Palestinian refugees in a number of countries including the West Bank and the Gaza Strip.

According to UN sources, the UNRWA is facing unprecedented financial strains. Currently, UNRWA is coping with $106.7 million deficit this year and that this might result in the halt of UNRWA’s work within three months. One of the factors which contributed to this alarming development is the continued Israeli blockade of Gaza. In addition, the complicated political structure there hinders the collection of the pledged donations. The Gaza Strip is one of the highest condensed populated areas in the world.  As a result of the continued siege as well as the numerous rounds of wars, it continues to lack the adequate aid to rebuild, and thousands of its residents continue to be in dire need of humanitarian aid.

The UNRWA aid is vital and essential to the residents of Gaza and without such assistance thousands of people will have no means of support. Such a step, if taken, will lead to a true humanitarian crisis in Gaza.

AHRC calls upon the international community to help support UNRWA so it can sustain its operations without any interruption.