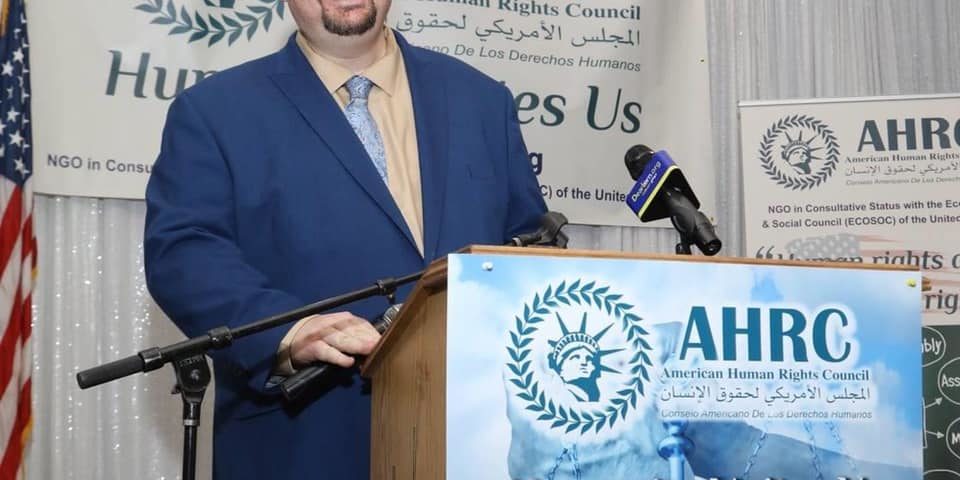 The American Human Rights Council (AHRC-USA) expresses its profound grievance and sadness for the tragic loss of State Rep. Isaac Robinson. Mr. Robinson died on Sunday, March 29, 2020 at age 44. His death is believed to be caused by health complications caused by COVID 19.Isaac was an honorable man, a true believer in human rights.

Rep. Isaac Robinson was a founding member of the AHRC. He was a devoted public servant who served his district and the people of Michigan with honor and selfless dedication. He was a tireless fighter and a strong advocate for social justice and equality. Even though he was a man with a sense of humor and an easy smile, he had steely determination. He was a big brother to all who knew him. He never hesitated to give a helping hand to anyone who asked him assistance. He was a straight shooter, and blunt but with utmost respect and professionalism

AHRC is truly saddened by the passing of Rep Robinson. For years, he helped advance the mission and the cause of human rights by being one of our prime activists and members. He never spared an occasion to provide any needed support. His contribution to the civil rights, human rights and social justice are immense. His passing is a sad day for all of his friends and all who worked with him over the years.

AHRC will miss Isaac dearly, as he was part of every AHRC event, especially the annual AHRC Spirit of Humanity Awards & Gala Dinner. He was very social and loved people. He connected with people of all kinds of backgrounds. The AHRC and its Gala will never be the same after his passing.

Rep. Robinson died during these exceptional times that we live in- the age of the pandemic. It’s a painful reminder that the novel coronavirus is a deadly serious threat.

Rep. Isaac Robinson is the son of former State Rep. Rose Mary Robinson. He was elected in 2018 and his district (District 4) includes Hamtramck and part of central Detroit. AHRC expresses its deepest sympathy and condolences to his family, friends, supporters and his fellow legislators at the Michigan House of Representatives.

“Isaac was like family to me, this is a personal loss of great magnitude,” said Imad Hamad AHRC Executive Director. “He was unique man and he is not replaceable. We will greatly miss him,” continued Hamad. “Even though he died at a young age, he made a big difference during his short life on this earth,” concluded Hamad.

“Rep. Robinson was a courageous man who spoke truth to power. His passing is a tragic and true loss to the civil and human rights community,” said Dr. Saleh Muslah, AHRC Board’s President. “He served the people of Michigan with great integrity, humility and respect.” continued Dr. Saleh Muslah.

Dear author,
Your story is published and below is a link to the publication
http://www.thenigerianvoice.com/news/286514/ahrc-deeply-mourns-the-death-of-rep-isaac-robinson.html