AHRC CONDEMNS THE BARBARIC KILLING OF INNOCENT LIVES BY ISIS: 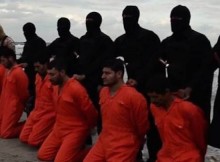 The American Human rights Council (AHRC-USA) joins all peace- loving people across the world in condemning in the strongest terms the barbaric acts of the so- called “Islamic State”/ISIS/IS against its captives among them the recent killing of the Copts/ Egyptian Christians in another cold- blooded crime against humanity. This act of terror comes amidst a series of acts of violence and terror across the globe including the execution of the three young Arab and Muslim America students at the University of Carolina, Chapel Hill.   AHRC expresses its condolences to the families of the victims and demands justice for all the other victims of IS who include people of all religious backgrounds. AHRC reminds all that terrorism has no religion, nor can it be attributed to atheism, and that the terrorist acts of a few should not be attributed to a religion or lack of religion, a sect or a national group. AHRC reiterates its strong position that the world community must define and address the challenge and the root causes of this growing threat against humanity beyond just expressing political stands or depending on reactive military acts. “This danger is deep rooted and the world still lacks a strategic vision and plan of action to face effectively this common threat. We cannot afford to have the world experience this terrorism for another year let alone another decade” said Imad Hamad. AHRC Executive Director.