AHRC CALLS ON EGYPT TO REVOKE ITS DEATH SENTENCES AGAINST DEPOSED PRESIDENT MORSI & OTHERS: 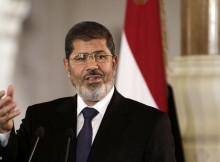 The American Human Rights Council (AHRC-USA) joins the world’s human rights community in calling upon the Egyptian government  to revoke  its execution orders rendered against former president Mohammed Morsi  (Morsi was ousted by the military in July of 2013) and other political prisoners. According to independent observers and human rights organizations and activists  who has been monitoring these court proceedings, it is evident that such  mass executions are politically motivated.  These execution orders are not justified and must be rejected. AHRC calls upon the international community through the United Nations to swiftly intervene to stop these political executions and to help compel the Egyptian government to revoke such orders immediately.

AHRC is deeply troubled with the situation in Egypt as to the rights of perceived opponents of the regime. AHRC reiterates its call on the Egyptian government to fully comply with the standards of the UN Universal declaration of Human rights. As a UN member, Egypt has the legal obligation to respect the UN charter and the United declaration of human rights among other of Egypt’s international obligations.