AHRC MOURNS THE DEATHS OF THE AFRICAN AMERICAN VICTIMS OF THE CHARLESTON TERROR ATTACK: 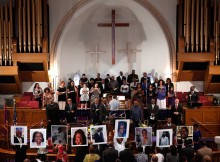 The American Human Rights Council (AHRC-USA) expresses its condolences to the families of the nine (9)  innocent victims who died as a result of the senseless act of hate and terror at theEmanuel African Methodist Episcopal Church in  Charleston, South Carolina on the evening of  June 17, 2015. The church is known as one of the oldest and historic sites in the area. Our hearts goes to the victims’ families and their loved-ones. We stand united with the nation and the world at large in condemning this heinous crime against humanity.

The shooter Dylann Roof was arrested pending judicial proceedings.  AHRC affirms its solidarity with the African American Community of Charleston and joins our fellow citizens in condemning this horrific crime against humanity. AHRC calls upon the authorities to conduct a transparent investigation regarding the motives behind such unspeakable crime. Such a crime is  not only an act of hate but an act of domestic terrorism as well. If is meant to terrorize and is directed against all African Americans. AHRC calls for unity among all the Charleston residents  and reminds all that terrorism and hate are our common enemies.

“Indeed it is another sad tragedy that befalls our nation and another act of hate and domestic terrorism in Charleston,” said Imad Hamad, AHRC Executive  Director. “HATE is our common enemy and it should not be tolerated.  We stand united against it” continued Hamad.