AHRC CALLS FOR PEACE IN YEMEN AND RENEWS CALL FOR TPS FOR YEMEN: 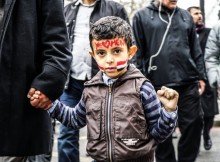 The American Human Rights Council (AHRC-USA) reaffirms its call for all parties involved in the current Yemeni conflict to adhere to the language of peace and dialogue and save Yemen and the Yemeni people from further destruction and bloodshed. Yemen and the Yemeni people deserve peace and not war. All military activity, air-strikes  and intervention in Yemen has increased the suffering of the Yemeni people especially women and children.  Peace is a basic human right to every person and must be protected. The ultimate victims of this  war are the noncombatants. Yemen, being one of the poorest countries in the world, is suffering damage to its infrastructure it has.  AHRC calls upon all the parties involved in the current Yemeni conflict  to seriously undertake peace-making efforts. AHRC calls upon all conflicting parties to respect the human rights of the Yemeni people. AHRC warns that the continuation of conflict in Yemen will further aggravate Yemen’s humanitarian crisis.

“The ongoing conflict  in Yemen and in other parts of the Middle East continues to threaten the stability of the whole region as well as world peace” stated Imad Hamad, AHRC Executive Director.