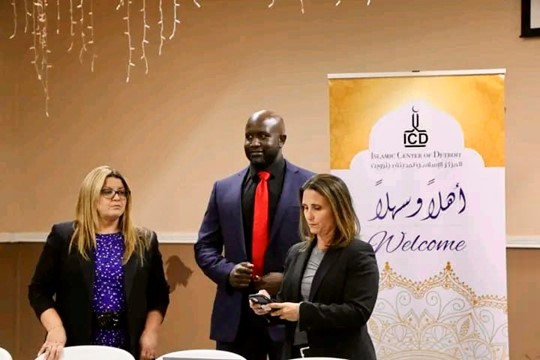 AHRC and ICD Hold Community Forum on Human Trafficking:
Recently, the American Human Rights Council (AHRC-USA) and the Islamic Center of Detroit (ICD) held a community forum and open discussion addressing the challenge of human trafficking. The forum hosted representatives from the Homeland Security Investigations (HSI)/Detroit of the Department of Homeland Security (DHS). Over sixty invited guests joined this conversation that was held at the ICD in Detroit.

This event is part of AHRC’s series of community forums conducted periodically. The purpose of these forums hosting different agencies; state, local and federal; is to shed light on pressing challenges of our time that have direct impact on our region. A forum is an opportunity to share views and advance awareness about pressing issues, to share ideas, listen and to learn. These sessions provide a forum for constructive engagement seeking collaboration and partnerships that help in envisioning solutions and identifying resources.

All participants acknowledged that no magic solution exists to ending this modern form of slavery that targets women and children. Sex exploitation, labor abuse and even organ sales are happening in the US and elsewhere. Human trafficking recognizes no age, no gender, and no economic background. People with disabilities are also targeted. No one is immune of being a victim. The most vulnerable remain the most at risk. This trafficking industry recognizes no boundaries. Community awareness and education is key. This heinous crime is driven by financial greed that is not checked by any consideration of law, morality, or ethics.

“We appreciate everyone from the government and civil society who participated in this forum,” said Imad Hamad, AHRC Executive Director. “It is important to sustain the in-person engagement and to continue to listen and learn from each other,” added Hamad. “We thank all who cooperated with AHRC and ICD to make this event another success in our model of community-government dialogue and engagement,” concluded Hamad.

Your story is published and below is a link to the publication
http://www.thenigerianvoice.com/news/312925/ahrc-and-icd-hold-community-forum-on-human-trafficking.html

Donate to AHRC: These are challenging times. Despite all the myriad challenges, AHRC continues its diligent work helping members of our diverse communities at all levels. To donate, please visit: www.ahrcusa.org for safe & secured donation. Every donation counts. No amount is small.
###
AHRC Mission:
The American Human Rights Council (AHRC) is dedicated to defending and protecting human rights as outlined in the U.S. Constitution and the United Nations 1948 Universal Declaration of Human Rights (UDHR). The AHRC was formed to protect these rights and advocate for anyone whose rights are being violated or denied. To that end, the AHRC will build a tenacious, objective, and carefully guided advocacy program that will serve to defend individual human rights, whenever and wherever they are being infringed upon
# # #
AHRC News & Views
Media & Information: (313) 9143251 or via email at: Info@ahrcusa.org
NGO in Consultative Status with the Economic and Social Council (ECOSOC) of the United Nations