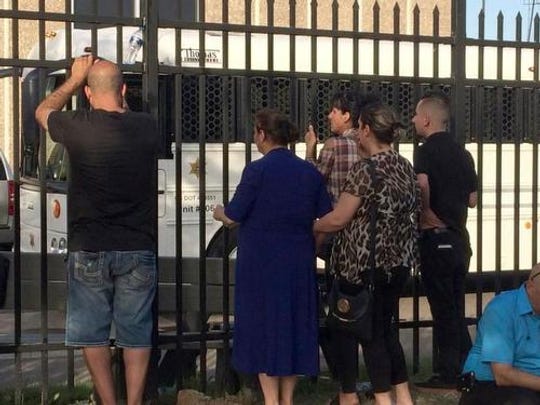 President Donald Trump announced on Twitter Saturday that a planned effort to deport millions of people in 10 cities who are in the country illegally would be put on hold for two weeks.
The Miami Herald and Washington Post reported that Atlanta, Baltimore, Chicago, Denver, Houston, Los Angeles, Miami, New Orleans, New York, and San Francisco were expected to be targeted in immigration raids starting Sunday.

Then, at 1:56 p.m. Saturday, Trump tweeted: “At the request of Democrats, I have delayed the Illegal Immigration Removal Process (Deportation) for two weeks to see if the Democrats and Republicans can get together and work out a solution to the Asylum and Loophole problems at the Southern Border. If not, Deportations start!”

The move came after House Speaker Nancy Pelosi had called Trump on Friday asking him to call off the operation. Separately, administration officials told The Associated Press that Immigration and Customs Enforcement was concerned that details leaked to the media could jeopardize its agents.
On Monday, Trump said on Twitter that U.S. Immigration and Customs agents would “begin the process of removing the millions of illegal aliens who have illicitly found their way into the United States. They will be removed as fast as they come in.”
The delay and the fact that Detroit didn’t appear to be on the list of targeted cities didn’t allay fears of local immigration advocates, who said they don’t trust the president.
“I wouldn’t pay him any attention,” said Elena Herrada, a Detroit community activist and immigration advocate said. “I don’t trust what he says; it’s part of his trap. It’s like saying ‘I’m going to come and get you,’ and then saying, ‘no, I’m not.’ He’s a bounty hunter.”

Imad Hamad, director of the American Human Rights Council, which advocates for immigrants, said he’s also skeptical of Trump’s tweet.
“I guess this is a good step in the right direction, but I’d be very cautious,” he said. “Such government initiatives usually are not disclosed in advance, so we don’t know what the truth is.
“(Trump’s most recent tweet) isn’t going to undo the fear and anxiety he’s already created,” Hamad said. “I think (his original tweet) served a purpose; it sent a political message. Saying he’s delaying for two weeks doesn’t take away that message.”

Detroit police chief James Craig said Saturday he’s not been contacted by federal authorities about any proposed immigration sweep in Detroit — and, he added, “that’s not what we do anyway.”
“We will seek out wanted felons in Detroit, whether they’re American citizens or not,” Craig said. “But as far as immigration issues are concerned, we’re not involved in that.”
Khaalid Walls, spokesman for the Detroit ICE office, did not return a phone call Saturday.

“Illegal aliens continue gaming the system by smuggling children to gain access to our country. After violating our laws, they further disrespect our country by refusing to show up for their hearings in court – so they are not even present when a judge orders them to be removed,” ICE spokeswoman Carol Danko said in a statement. “No American citizen can get away with breaking the law or violating a court order – and neither should illegal aliens. If Congress does not change the laws to ensure illegal aliens can be promptly removed at the southern border, there is no alternative but to continuously arrest these fugitive aliens in the interior.”
Danko also reiterated what Trump said about safety.

“Any leak telegraphing sensitive law enforcement operations is egregious and puts our officers’ safety in danger. U.S. Immigration and Customs Enforcement (ICE) officers are true American heroes and the President’s postponement protects officers and provides an opportunity for Congress to swiftly work together in a bipartisan fashion to end the incentives for child smuggling and ensure all illegal aliens can be promptly returned upon apprehension at the southern border.”
Sterling Heights resident Tom Mitchell said he supports the immigration sweeps.
“It’s about the sovereignty of our country,” he said. “We either have laws or we don’t. These are people who broke the law when they came here illegally, and they broke it again (by not showing up to court hearings).

“I’m not saying these people don’t belong here, and my heart goes out to them,” Mitchell said. “But they’ve got to respect our laws. If we don’t enforce our laws, we won’t have the kind of country the immigrants are coming here for in the first place.”

Michigan was included in a mass immigration sweep in 2010 under former President Barack Obama, the largest of its kind to that point, which during a seven-day period resulted in 2,900 deportations nationwide. During that initiative, dubbed “Cross Check,” there were 60 arrests made in Michigan, 28 of which were in Metro Detroit.
Earlier this week, ICE officials said they had sent about 2,000 letters in February to people in “family units” who had already received final orders to leave the country. It was unclear whether the recipients of those letters would be part of Sunday’s reported sweeps.

Hamad said he thinks Trump’s proposed initiative — whether it happens Sunday or in two weeks — is politically motivated. “I’m not saying there doesn’t need to be immigration reform; we have a broken, outdated immigration system,” Hamad said.”But these problems cannot be resolved by these kinds of partial steps that are mandated by a political agenda. The President is just doing this so he can be seen as taking action, and to warn people: ‘We’re here; we’re watching and coming for you.’ That’s not a solution.”
ghunter@detroitnews.com
(313) 222-2134
Twitter: @GeorgeHunter_DN
The Associated Press