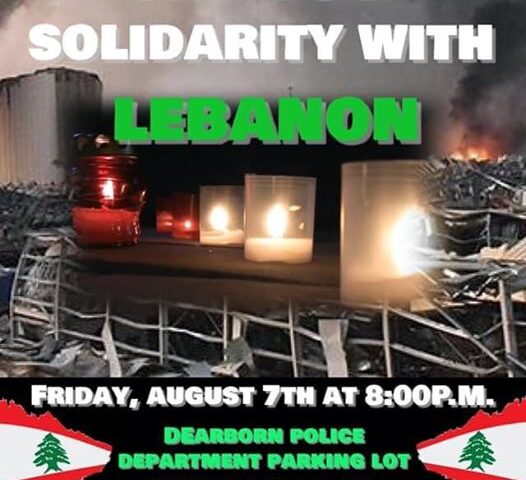 Please join us this Friday, August 7th, at 8pm (EST) in the parking lot of the Dearborn Police Department located at 16099 Michigan Ave., as we stand in solidarity with Lebanon.

Beirut is reeling and Lebanon is in grief after a powerful explosion tore through the capital’s port area on Tuesday. The enormous blast, which officials said was driven by thousands of tons of ammonium nitrate, killed at least 135 people, injured thousands more, displaced hundreds of thousands and left a over $4 billion of damage. Emergency crews are still working to find all the victims.

Video recordings captured Tuesday’s explosion, which followed a smaller blast and fire in a warehouse at the port. The explosion created an immense shock wave that shattered windows and was felt for miles around.

Aerial footage shows the port and surrounding neighborhoods are now a wasteland of devastated buildings and crushed vehicles. With smoke still rising at the blast site, rescue workers are digging through the rubble in search of victims trapped underneath. Families have posted pictures of loved ones on an Instagram page that’s been set up for the missing.