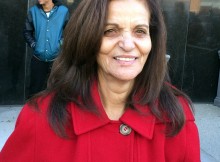 THE American Human Rights Council (AHRC) joins fellow human rights groups and the Arab and Muslim American community at large in expressing sadness and disappointment at the criminal proceedings against Ms. Rasmeah Odeh. Odeh, an esteemed Arab- American leader, was convicted of lying on her immigration and citizenship applications.  On March 12, 2015 district court judge Gershwin Drain sentenced Odeh to 18 months in prison. The conviction of Odeh will lead to the loss of her US citizenship and eventual removal to Jordan. According to Ms. Odeh’s legal team, she remains free on bond pending her appeal that may take at least six months. Odeh’s lead attorney Michael Deutsch told supporters the prison sentence was “unjust” and “unnecessary”. The prosecution asked the judge to sentence Odeh to 5 to 7 years in prison.

AHRC commends the judge’s decision not to follow the prosecution’s recommendation and is relieved that the Court allowed \Ms. Odeh to remain free pending her appeal.  AHRC reiterates its position that there is a widespread belief among human rights activists that Odeh’s case is politically- motivated.

AHRC will continue to monitor the developments of this case due to its chilling impact on the community at large and its impact of the perception of the basic fairness of the American judicial system.