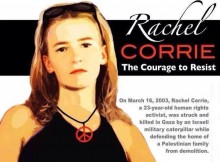 Rachel Corrie was a 23-year-old American peace activist from Olympia, Washington, who was crushed to death by an Israeli bulldozer on 16 March 2003, while undertaking nonviolent direct action to protect the home of a Palestinian family from demolition.

Since her killing, an enormous amount of solidarity activities have been carried out in her name around the world.

Rachel’s journals and emails from her time in Palestine are available in a variety of forms. They have been published in books, turned into plays and dramatic readings, and used around the internet. They are not always reproduced in their entirety and we have collected them here, un-cut, for easier reading. Read Rachel’s emails from Palestine.

I should at least mention that I am also discovering a degree of strength and of basic ability for humans to remain human in the direst of circumstances – which I also haven’t seen before. I think the word is dignity. I wish you could meet these people. Maybe, hopefully, someday you will.
– Rachel Corrie, in an email to her mother, February 28 2003