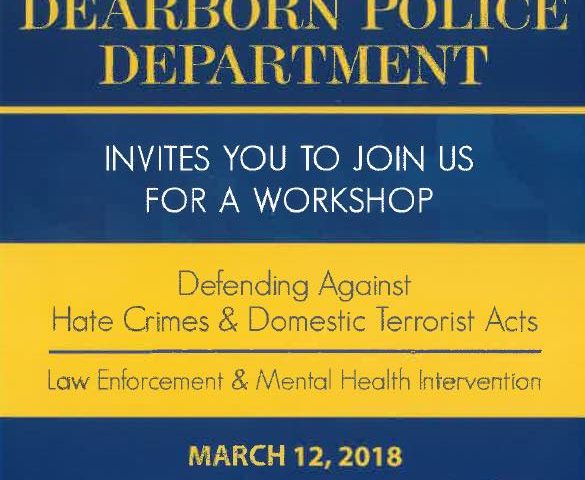 On Monday, March 12, 2018, at 6:00 p.m., the Dearborn Police  Department will be holding a public workshop titled “Defending Against Hate Crimes & Domestic Trout ACTS”. The Workshop will be held at the Ford Community & Performing Arts Center located at 15807 Michigan Ave. in Dearborn. The event is free and open to the public.

The American Human rights Council (AHRC-USA) calls for active participation in this important conversation and discussion amidst the increased domestic terror acts and acts of hate across the nation. The recent school shooting in Florida and the several other violent incidents and schools lock-down within the tri-county area, make such educational and awareness session very important. Time is due for active and effective engagement between first responders and the communities they serve. No location is immune of being a target. Collaboration is a basic step towards preventing and defeating violent attacks.

AHRC salutes the Dearborn Police Department for this important initiative and calls upon other police  departments to organize such events.

“Hate is blind. Ignorance is blind. Terror is blind,” said Imad Hamad, AHRC Executive Director. “Through effective engagement and partnership with stakeholders,  bringing communities and first responders to the table, we can together help contribute to the safety and security of our schools and neighborhoods.” continued Hamad.