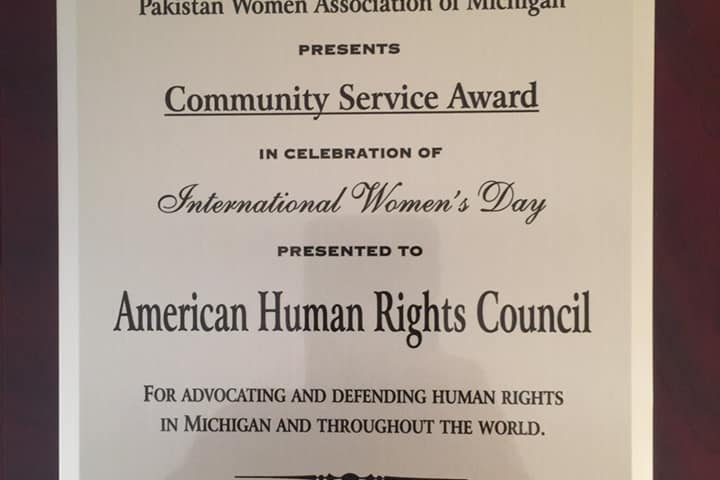 The American Human Rights Council (AHRC-USA) is humbled by being recognized by the Pakistan Women’s Association of Michigan during their annual dinner celebrating International Women Day that was held on Friday March 8, 2019 in the city of Farmington Hills, Michigan.

The event hosted over 400 guests including community leaders, dignitaries and officials. Both Congresswoman Brenda Lawrence and Consul General of Pakistan, Mr. Javed Umrani, were the guests of honor for this year’s International Women Day celebration.

Congresswoman Brenda Lawrence spoke about the hard work and strength of women in history of America and the importance of women empowerment and equality. Consul General of Pakistan highlighted the achievements of women in Pakistan over the years. Both speakers applauded the important charitable work being done by PWAM.

PWAM presented Congresswoman Brenda Lawrence with the Champion of Women Issues Award. The American Human Rights Council was recognized with the 2019 Community Service Award for its leadership in advocating and defending human rights in Michigan and throughout the world.

“It was very gratifying to receive such an award during this special occasion,” said Dr. Saleh Muslah, AHRC Board President. “AHRC is committed to women empowerment and our AHRC women delegation to the United Nations this year highlights the importance of women’s empowerment to AHRC,” continued Dr. Muslah.

“This is another special Badge of Honor that we receive as AHRC team this year,” said Imad Hamad, AHRC Executive Director. “Women’s rights are human rights and universal. We value our partnership with PWAM towards advancing women rights at home and abroad,” concluded Hamad.