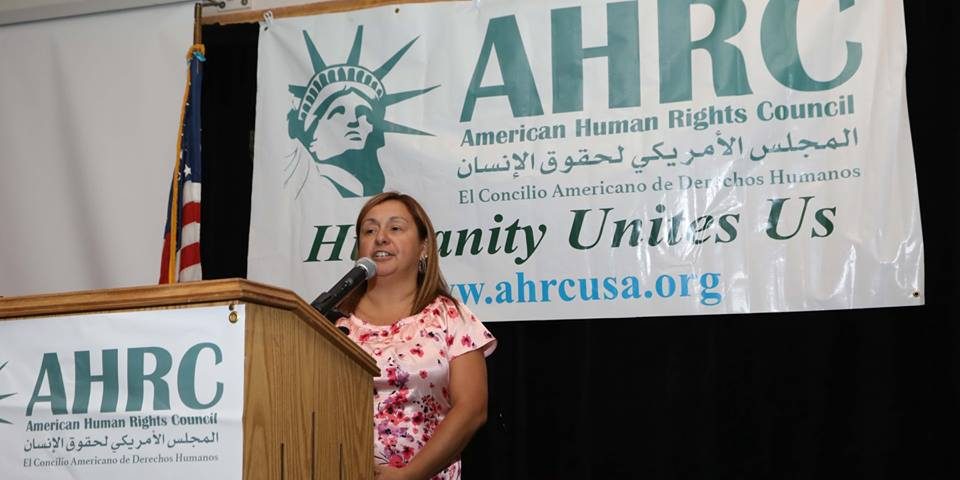 On Friday May 4, 2018, Mrs. Cindy Garcia, an immigration- reform activist, spoke at the AHRC “Spirit of Humanity” Gala sharing the story of her family with immigration and helping provide the human context for the immigration debate. Mr. Garcia was Congresswoman Debbie Dingell’s guest during President Trump’s State of the Union address on January 30, 2018.

Mrs. Garcia highlighted her own family’s struggles when the immigration authorities removed her husband, Jorge Garcia, to Mexico.  Mr. Garcia came to the country when he was 10 years old and lived in legal limbo until he was removed from the country leaving behind his wife, Mrs. Garcia, and his two US- born siblings.  Mr. Garcia for years had tried to adjust his status in the US but was unable to do so.

Mrs. Garcia called upon all American citizens and all elected officials to help her husband and many others that are harshly affected by the current immigration laws. The US immigration system is not working when it breaks families of hard working people like the Garcia’s.

AHRC and its guests were moved by the impassioned and sincere plea of Mrs. Garcia. AHRC affirms that the Garcia family’s struggle is one of many examples of families that are separated by our harsh immigration laws.

“We think of the immigration issue in the context of human rights, indeed, immigration is quintessentially a human rights issue,” said Imad Hamad, AHRC Executive Director. “We thank Mrs. Garcia for speaking at our Gala and for presenting the human side to an issue that is often seen by many in the government as merely a political, technical and/or legal policy issue,” added Hamad. “Immigration reform should be a bipartisan issue guided by respect for human rights and true to the democratic values of American society,” concluded Hamad.