AHRC: President Trump’s position on moving the US Embassy to Jerusalem is a setback to peace: 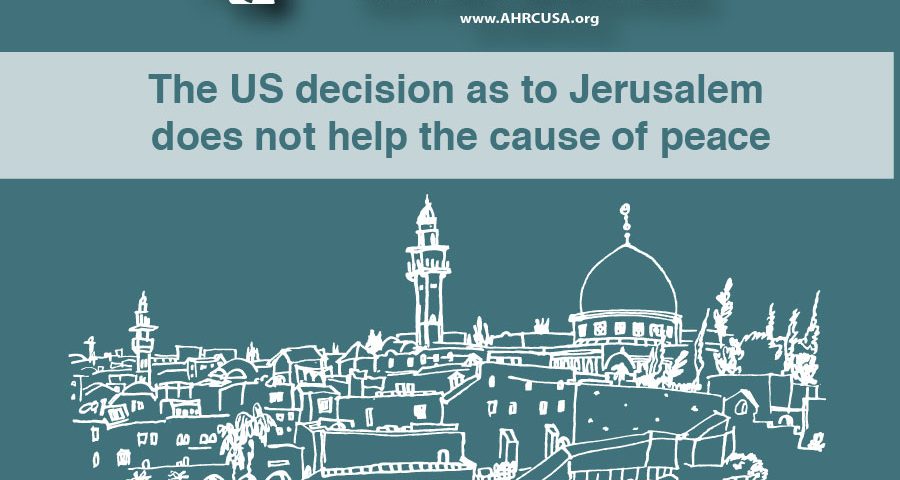 The American Human Rights Council (AHRC-USA) reiterates its strong opposition to President Trump’s directive to relocate the US Embassy to Jerusalem that is set to take place on May 14 and urges him to reverse that decision.

AHRC-USA strongly believes that such a political one-sided move will only increase the tensions and aggravate the conflict and widen the gap between the parties.

AHRC is mindful that there is a congressional act requiring the relocation of the embassy to Jerusalem. However, it is important to note that, Congress understanding the sensitivity of the issue gave the president the authority to postpone the move. Former presidents have routinely postponed the removal due to a number of factors foremost of which is the viability of the peace process and America’s role in it.

The relocation of the embassy, if it happens, will be on May 14, Israel’s Independence Day. The Palestinians’ catastrophe, “Nakba“ Day, is on May 15.  With the move on that day, the US has abandoned all semblance of fair brokering of a peace agreement between the Palestinians and the Israelis. In addition, the relocation of the US Embassy comes amidst the increased escalation of conflict between Palestinians and the Israeli occupation army. The conditions in Gaza are already dire with Israeli soldiers firing on civilian unarmed protesters.

The international community, especially America’s friends and allies, have spoken against the move.  AHRC believes that America, as the world’s only superpower and as a major and unconditional supporter of Israel, has an obligation to be a peace maker. The US should not needlessly add to the tensions in a region that already has a number of ongoing violent conflicts. Jerusalem is holy to the Jews Christians and Muslims as well and its status must be preserved as such.

“The Removal of the US Embassy not only would not advance America’s stated goal of a peaceful resolution to the conflict, in fact, it would exacerbate conflict and inflames tensions,” said Imad Hamad, AHRC Executive Director.