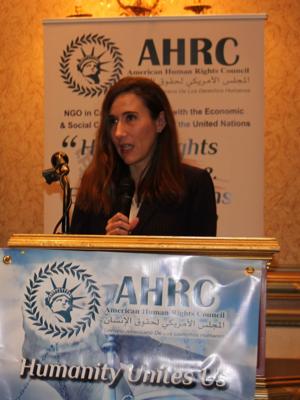 Human trafficking, whether through the sex trade, enslaved workers or organ donation, represents a global problem, which the American Human Rights Council addressed Oct. 10 at its annual community forum.

Held this year at the Bint Jebail Cultural Center, the annual AHRC dinner focuses on different challenges each year, bringing in speakers knowledgeable from diverse perspectives. In 2017, the refugee crisis was spotlighted, while the 2018 forum addressed hate crimes and domestic terrorism.

Imad Hamad, executive director of the American Human Rights Council, said AHRC assembled speakers this year who will explain the challenges associated with combating human trafficking, and said any of us could be victimized.
Dr. Saleh Muslah, AHRC board president, said human trafficking is a business, in which you have criminal elements which affect everyone worldwide.

“There are two participants – the criminal and the receiver,” Muslah said. “Whether it is for enslavement, sex trafficking or even organ donations, it is a big, big problem, especially in vulnerable countries that are undergoing political upheavals, such as Yemen, Syria and countries in Africa.”
Modern form of slavery.

Bachar Sbeiti-Kachkouche, an AHRC youth member and a student at Wayne State University, said violation of our human rights violates our humanity.
“Human rights are being violated indiscriminately across the globe,” Sbeiti-Kachkouche said. “Basic things which we take for granted in our lives can be someone else’s pipe dream.
“Living within this landscape, it can be easy to become desensitized to these stories. I don’t want to live in a world where human rights violations become just a normal part of our lives.”
He said that human trafficking is just a modern phrase for slavery, and said most of the victims are children, especially girls.
Sbeiti-Kachkouche said human trafficking is increasing each year, has surpassed illegal weapons sales in terms of revenue, and is poised to surpass the revenue of illegal drug sales.

He urged listeners to be conscientious and informed consumers, and to stop using products made by child slaves. To see a list developed by the U.S. Department of Labor, go to dol.gov/agencies/ilab/reports/child-labor/list-of-goods.
Sbeiti-Kachkouche said spreading awareness is also important.
“Educate those around you about the slavery epidemic,” he said. “Show people that it is a big deal, and they should care, and pay attention. As long as we continue to brush over the topic, things aren’t going to change.”
Sbeiti-Kachkouche said it is difficult to distinguish a slave from a criminal when they are selling their bodies for prostitution and doing drugs.
“This dichotomy is what makes the issue so difficult,” he said. “Human traffickers are taking innocent young children and turning them into criminals. Usually by the time they have been found, they have become criminals.”
Sbeiti-Kachkouche said he hopes the gathering is not a wasted chance or “just another dinner.”
“I hope we take advantage of this opportunity to work together, and try to make a true impact,” he said. “I am confident that if we stand together, we can make a dent in the atrocity that is modern slavery.”

April Nicole Russo, assistant U.S. attorney for Michigan’s Eastern District, said sex trafficking is modern-day slavery.
“It involves the illegal trade of people for exploitation or for a commercial gain,” she said. “It impacts all socio-economic groups. It involves men and women, boys and girls, and it’s happening right here.” Russo said sex trafficking involves the use of force, fraud or coercion in order to entice an adult or a child to engage in a sexual act for profit. She said it is more than physical force or intimidation, and can include psychological coercion, as well as addicting the victim to illegal drugs.
She said some do not know the language of the country in which they are being exploited.
“Pimps are finding the most vulnerable members of our society, and exploiting that vulnerability for their own personal gain,” Russo said. “Worldwide, traffickers are earning over $150 billion a year in profit from this illegal trade.”

She said the National Center for Missing and Exploited Children estimates that one out of seven runaways are victims of sex trafficking, and the average age of a victim of sex trafficking is 13 years old. Russo said there is a direct correlation between sex trafficking and sexually abusive images of children on the internet, which is also on the rise.
April Nicole Russo, assistant U.S. attorney for Michigan’s Eastern District, speaks Oct. 10 at a community forum and dinner reception, focusing on the challenges of human trafficking, at the Bint Jebail Cultural Center in Dearborn.
Sue Suchyta — For MediaNews Group, She said law enforcement continues to crack down on websites used to traffic victims, and is running undercover stings.
“What people sometimes forget is that at its core, sex trafficking involves both domestic violence and sexual abuse,” Russo said. “The power and control wheel, the domestic violence cycle is very much a part of what we face every day when we try to help these survivors. Their self-esteem is shattered, and they feel completely dependent, isolated and alone.”
She said those involved in the fight against human trafficking must face the reality that some of its victim will never leave the lifestyle and may never stop loving the person that is abusing them.
“Empower them, believe in them, stand by them, and whatever you do, don’t be another person that gives up on them,” Russo said. “The only way for evil to triumph is for good men to stand by and do nothing. So, together, let’s do something.”
‘There is hope’

Dr. Hany Saqr, CEO of Life for Relief and Development, said his organization provides children around the world with shelter, nutrition and medical care to make sure they are not exposed to a situation in which they could become vulnerable to exploitation. He said they focus of prevention, protection and prosecution.
He said from Afghanistan to Yemen, its orphan program provides shelter, nutrition, education and medical assistance. Saqr said prevention and protection are key to keeping children away from sex traffickers. “Where there is life, there is hope,” Saqr said.

The Department of Homeland Security is also changing victims’ lives, according to Valentina C. Seeley, a community relations officer with Homeland Security Investigation.
She said the community plays a crucial role in helping them rescue victims, and HSI’s global footprint allows it to be strategically situated to work with law enforcement partners, as well as non-governmental organizations to generate human trafficking tips and leads worldwide.
“Our counter-human trafficking strategy is rooted in prevention, protection, prosecution and partnership,” Seeley said. “We focus on victim-centric investigations, where equal value is placed on the identification and stabilization of victims, as well as the investigation and prosecution of suspects.”
She said victims are crucial to the prosecutions and convictions. “Each case and every conviction changes lives,” Seeley said.
She said sweat shops, massage parlors, agricultural fields, restaurants, hotels and domestic service are among the jobs in which slave labor is used.

“Traffickers prey on victims with little or no social safety net,” Seeley said. “They look for victims who are vulnerable, either due to their illegal immigration status, limited English proficiency, and those who may be in vulnerable situations due to economic hardship, political instability and natural disasters.”
She said it is important for the community and law enforcement to work together. “Our common goal is to help the victims end the trafficking and end this heinous crime,” Seeley said.
Community education

Sgt. Amber Roberson of the Detroit Police Department said grant money has allowed her force to triple its size and obtain specialized training to stop human trafficking. She said they also have liaisons in each precinct to educate officers about signs of human trafficking. She said they also work to make the public more aware.
“Community education is vital in fighting this crime,” Roberson said. “We go to schools, community meetings and colleges. Our mission is to combat human trafficking from all angles.”
She said officers are used as decoys in high prostitution areas, and in strip clubs, and they focus on reducing prostitution within neighborhoods.
She said their goal is to shut down strip clubs where prostitution is occurring, and to give a new start to the victims.
Hamad said other human trafficking victims, those who become live organ donors, receives less attention, but it is pervasive outside of the United States, and also exploits a vulnerable population.
“This is a true challenge facing our world,” he said. “We may not see it in America, but if we talk about the outside world, it is one of the most booming unfortunate businesses.”
Hamad said its victims are literally torn apart and their organs are sold. He said some people choose to sell their organs to survive, while other vulnerable people are kidnapped and their organs are harvested against their will.

“It could be legal for someone to decide to sell an organ, just to simply survive,” Hamad said. “It is unethical because nobody should die from hunger or be put in that position, to sell their organs or their children’s organs for the sake of surviving.”

Keynote speaker Kelly Tallon Franklin said she spoke to them from the perspective of a human trafficking survivor.
She asked attendees to listen carefully, to learn what they need to look for to recognize human trafficking, and the signs they see everyday, that could be indicators of someone who needs help.
Franklin, who runs a safe house for those who have been trafficked, said she speaks for those who are voiceless.
“This is an injustice issue,” Franklin said. “The statistics tell you that more and more of your young people that are American are being drawn in, because the criminals have figured out that they can shame girls who come from good homes, and embarrass them, coerce them and use psychology, and drag them in until they will not talk to anybody that they used to know for support.”
She said the trafficked individuals need to be treated like victims, not criminals, and offered trauma support for post-traumatic stress syndrome. She said their traumatized brains are similar to what prisoners of war have undergone.

“You are going to be the human that does something about human trafficking,” Franklin said. “We are not going to be quiet about this, because when we are quiet, the criminals win. Keep the conversation going, and do not get tired, because the criminals won’t.”
To learn more about human trafficking, and what can be done on an individual level to help spot it and intervene, call the National Human Trafficking Resource Center at 888-373-7888 or go to dhs.gov/blue-campaign.
To learn more about the American Human Rights Council, go to AHRCUSA.org.