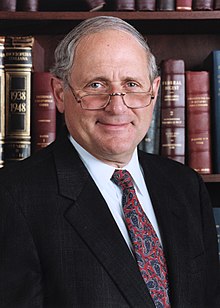 [Michigan, August 16, 2021]: On July 29, former US Senator Carl Levin, the longest serving member of US Senate in Michigan history, died. His death follows the death of another giant of Michigan and American politics, Congressman John Dingell.

The death of Senator Carl Levin, just like Dingell’s death, were personal losses to me. Both helped shape my activism, especially after 9/11. Both were supportive of the Arab and Muslim community and defended our civil liberties and rights. I liked and respected both of them.

Carl Levin was a humble leader. He was accessible to his constituents. He had an open-door policy. He always strived to help, especially when it came to civil rights and civil liberties. He was a passionate fighter for justice. Regardless, if you agreed or disagreed with some of his positions, he sustained his calm, smiled and was open to discussion and debate. He never let political differences become personal animosities.

One landmark experience with Carl Levin was the establishment of BRIDGES (Building Respect in Diverse Groups to Enhance Sensitivity). BRIDGES is a forum for dialogue between the Arab and Muslim American community and the federal government and its law enforcement agencies. I recall the tough times and the high level of stress and anxiety that gripped Arabs and Muslims in the aftermath of the 9/11 attacks. As community leaders and activists, we were shocked by the terror attack. We worried about our community’s future and looked for guidance on how to cope with the crisis. Senator Carl Levin, along with Representative Dingell, stood by the community during this most difficult time.

I recall contacting Senator Levin and requesting a meeting to discuss the 9/11 attack’s impact on the community, the fear and the uncertainty. The whole weight of the federal government was going to be directed at Muslim and Arab Americans and we wanted to know how to deal with it. Mr. Levin immediately accommodated our request to meet with him to share our concerns. One piece of advice he gave us: “You need to immediately contact the new US Attorney for the Eastern District of Michigan and meet with him.”

I called Mr. Collins and left a voice message. The second day, Judge Collins called back. He said he is not officially the US Attorney yet, but he assured me that we will meet once he is officially in. A few days later Mr. Collins called me and invited me for a meeting at his office. We met and discussed the importance of constructive, effective and professional engagement between the community and the federal agencies. Our common goals were fighting hate crimes and ensuring the safety of everyone. Mr. Collins indicated the importance he puts on this engagement by telling me that we are meeting on his first day on the job. This would not have happened without Mr. Levin’s intervention.

There is a lot of cynicism in American politics. There are many politicians that are self- serving. Others that are show horses and media attention hogs, with a subset using foul language to become the center of attention. That was not Car Levin.
Carl Levin was no ordinary politician. He was Jewish and pro- Israel. I am the Muslim child of Palestinian refugees. Even though we were on opposite sides on the Middle East conflict, we dealt with each with respect and found issues that we could work together on.

Mr. Levin was a public servant who took the public trust very seriously. He never hesitated to listen and give honest advice. Not too many elected officials are like that. The nation is in dire need of leaders like Carl Levin.

Carl Levin, you are truly missed. Your legacy will continue to inspire for years and decades to come.

Dear author,
Your story is published and below is a link to the publication
http://www.thenigerianvoice.com/news/301185/losing-senator-carl-levin-.html
https://thearabdailynews.com/2021/08/16/losing-michigans-senator-carl-levin/

Carl Levin was humble leader, will be missed by many