Israel at Seventy-three: Years of Conflict and Dispossession 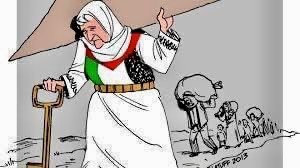 [Michigan, May 15 2021]: The birth of the state of Israel is seen by Israel supporters as a miracle. For the Palestinians, it was not a miracle. It was a Nakba, a catastrophe. When Israel celebrates its independence, Palestinians mourn the loss of their homeland and the ongoing tragedies Israel has imposed on them. It was a foregone conclusion.

What has happened during these seventy- three years of Israel’s existence? 73 years of conflict and wars that have claimed thousands of innocent lives and displaced millions of Palestinians. Millions of Palestinians have been living as refugees in different countries such as Lebanon, Syria, Jordan, Egypt and other places. These Palestinians were uprooted from their own homes and their property were confiscated and stolen. Israel, despite international law, refuses to allow them to exercise the Right of Return.

What does a dispossessed person with no rights do? They have to resist and claim what is unjustly taken from them. This is the Israeli-Palestinian conflict. It’s not about religion. The identity of the usurper of land is not the issue. The issue is the deed- the ongoing bad deeds. It’s the occupation.

The Palestine issue is governed by international law. The UN divided Palestine into two states. The UN resolution that divided Palestine designated Jerusalem as a Corpus Separatum, an international city subject to neither Jews nor Arabs. Israel continued to defeat that status. It was not the Palestinians that prevented the birth of a Palestinian state. That is documented in Israeli historian Avi Shlaim’s book, Collusion Across the Jordan.

Israel has ignored all UN resolutions providing a semblance of justice to the Palestinians. The US has used its veto power a number of times to prevent the UN Security measures that would force Israel to respect international law. The US not only gives billions of dollars to Israel every year, more important is the US veto at the UN. That veto is a de facto Israeli veto.

No one is against peace. But there will be no peace as long as Palestinians are denied their basic rights. Israel has two choices: One state for all its citizens or two states for two peoples. Israel wants a third option- an apartheid state. The human rights community considers apartheid the reality on the ground today. No one should allow that to continue.

The recent flare up is the result of the recent Israeli attempts to expel and uproot Palestinians from their homes in Sheik Jarrah neighborhood in East Jerusalem. Israel claims it is simply a real estate dispute. It is not. It is about Judaizing Jerusalem and expelling as many Arabs as possible.

Israeli ethnic-cleansing efforts coincided with Israeli extremist settler attacks on Palestinians during the final days of the holy days of Ramadan. Palestinian protests led to Israeli suppression that spilled into the Al Aqsa mosque. The violence of Israeli settlers and police escalated the conflict and Israel launched war on the besieged Gaza targeting overwhelmingly civilian targets. Gaza is a small impoverished highly dense enclave that has been under siege and occasional bombardment for years.

The power imbalance between Israel and Gaza is massive. Israel conducted hundreds of raids on Gaza, an area that probably has only a handful of legitimate military targets. The goal was to exact revenge by punishing the population. At least forty percent of the victims of the Israeli heavy bombardments using US weaponry killed elderly, women and children.

As a Palestinian refugee myself, I wish for peaceful co-existence. I want a future where all children enjoy freedom and equality. No one condones the killing of innocent life. The value of the human life is not determined by religion or nationality. Palestinian lives matter too.

I am optimistic by nature. Despite all the violence, I believe that peace is possible. Injustice will never last. Justice will always prevail. President Biden pledged policies that uphold human rights for all. Palestinians should not be the exception. The whole world is looking at the US and its leadership to help end this conflict and end the double standards.

I hope that these recent tragic developments in Palestine will serve as a wakeup call for all about the need for real peace in Palestine and the region.

Dear author,
Your story is published and below is a link to the publication
http://www.thenigerianvoice.com/news/298679/israel-at-seventy-three-years-of-conflict-and-dispossession.html

Help AHRC Protect Human Rights: These are challenging times. It is our common humanity that we are determined to protect. To donate, please visit: www.ahrcusa.org  for safe & secured donation

AHRC News & Views: Media & Information: (313) 9143251
NGO in Consultative Status with the Economic and Social Council (ECOSOC) of the United Nations