INTERVIEW WITH IMAD HAMAD, EXECUTIVE DIRECTOR OF THE AMERICAN HUMAN RIGHTS COUNCIL RE: THE AHRC ‘PROTECTING OUR HUMANITY’ SEMIANNUAL DINNER 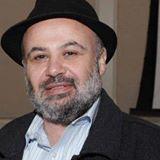 ‘PROTECTING OUR HUMANITY’ SEMIANNUAL DINNER WAS A GREAT SUCCESS AND WE SENSE A STRONG SUPPORT OF HUMAN RIGHTS IN THE ARAB AND MUSLIM COMMUNITIES.”

Imad Hamad is a true humanitarian. Over the years through his involvement in the non- profit sector he has helped many people. He has mentored people and encouraged men and women to volunteer and be involved in community activism. Mr. Hamad has received many recognitions over the years and has been interviewed by national and international media. He continues his work in the non- profit sector by moving from civil rights and civil liberties to defending and promoting human rights in the US and in the rest of the world. It is not easy to form an organization and to organize a successful banquet. Mr. Hamad and his team are off to a great start.Imad Hamad is a well- known figure in the Detroit Arab American community. After leaving the American Arab anti- Discrimination Committee, Mr. Imad Hamad and others formed the American Human Rights Council (AHRC). The Forum and Link attended the packed first banquet. The creation of a new organization whose focus is on human rights was a brilliant idea for Mr. Hamad. There are many organizations in the community who do great work. AHRC is the only community based organization that focuses on human rights. H.E. Dr. Clovis Maksoud, AHRC Honorary Chair, in an email addressed to AHRC and its supporters stated: “AHRC comes at a time when the abuse of human rights in many parts of the world and its destructive impact on the unity of many societies, your advocacy to emphasis human rights and humanitarian aid in the United States must also be translated to areas where it is even much more required. What many societies in Africa and in the Arab World are experiencing at this moment must be included in your corrective role of the flaws and political defects that allows the abuse of human and humane rights to be regularly violated. Your role as human rights activists should broaden its scope beyond the American national scene into a network of your colleagues throughout the world in upholding the moral and ethical values to which you are committed and which should be pursued internationally.”

The following are excerpts from an interview with Mr. Hamad.

F & L: Congratulations on a successful banquet. How do you feel?

Hamad: Relieved and thankful. Organizing AHRC, planning the event and the banquet consumed countless hours and a lot of effort. I am relieved that we have been able to reach this point and held an event that everyone acknowledges was a great event. I am thankful for the generosity of our donors and supporters. We have a great board and board chair. Our volunteers did a great job. The owner and the staff at Byblos helped us have a great event. I am grateful to the parents of the courageous American woman Kayla Mueller, Marsha and Karl Mueller, who joined us at our event and accepted her award.

F &L: Why did you choose to recognize and honor Kayla Mueller?

Hamad: We chose her for many reasons two of which are what she stood for and the ultimate sacrifice she made. She was a woman that represented the best American values, who believed in human rights and risked her life to help others- in Palestine and in Syria. She was killed by extremism and terrorism, the enemies of human rights. Kayla is a role model, her legacy inspires us. The words of Marsha Mueller provide inspiration to the work we do, she said “help us carry on Kayla’s legacy through sowing seeds of compassion, kindness and peace.” Marsha and Karl Mueller raised a true humanitarian.

F &L: Are you happy with the media coverage?

Hamad: Yes. The media is very important for the survival and continuity of democracy and for helping create a culture of human rights.

F & L: Who attended the banquet?

Hamad: About 500 people attended our banquet at Byblos banquet hall. We are being talked about because for a young organization we have started with a strong event. We had a number of officials in attendance and received 30 proclamations. We had 12 state representatives in attendance. It is a great vote of confidence in the organization and its leadership. It is an attestation to the need and necessity for an organization like AHRC.

F & L: Some ask whether we need another organization in the community. Why is AHRC needed?

Hamad: The support we get, the turnout we had at the banquet, they all testify to the clear sense people have that AHRC is needed. We are not in competition with any other organization. We believe all of them do good work and are needed. Our vision and our mission complement what others do. We focus on human rights- the creation of a culture of human rights. We need that outlook, that orientation, that frame of reference.

F & L: What do you think of the events in the Arab world? Is advocacy of human rights able to counter violence and hate?

Hamad: What is happening in the Arab world is tragic. Take Yemen for example- one of the poorest countries in the world and perhaps the poorest in the Arab world. You have people dying and suffering. Human rights advocacy is about respecting the human rights of each and every individual. We are helping create a culture of respect of human rights of all. I truly believe that once we respect and honor each other as human beings, we will go a long way in diffusing the tensions that lead to violent conflict.

Hamad: Our banquet was a great success and we sense a strong support of human rights in the Arab and Muslim communities. We aspire to augment the conversation on civil rights and liberties within the broader frame of human rights. We are working to sustain the momentum. We are moving forward and we are confident that AHRC will grow and the cause of human rights will get the visibility and advocacy that it deserves with our efforts and the efforts of our sister organizations in the human rights community. Dr. Alzohili, our board president, said that “injustice and hatred are a threat to everybody.” The promotion of human rights is the antidote to injustice and hatred.

Thank you for the interview. Please convey my sincere appreciation to the Forum and Link publisher my friend Dr. Assad Dandashli.