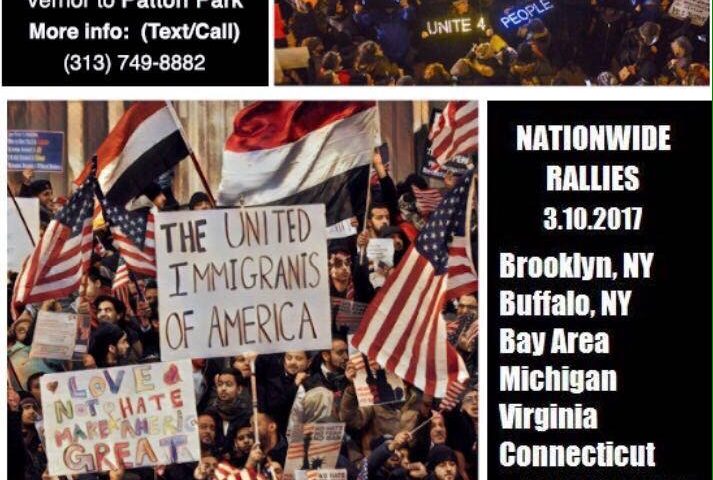 Take Action. Make Your Voice Heard. Defend our American values.
Join the rallies across the United States. Partial list of cities organizing the rallies are Brooklyn, NY; Buffalo, Ny; Bay area; Virginia; Connecticut and including the State of Michigan.
The Michigan’s Rally will be held on Friday, March 10, 2017 at 1:PM. Gathering in front of Masigid in SouthEnd of Dearborn . March will end at Patton Park in Dearborn-Detroit area. For more information regarding the Dearborn’s Rally call: 313-749-8882. United we stand. Together we are One.

Dearborn/Detroit, MI: The Executive Order “Muslim Ban 2.0” was signed by Pres. Trump signed March 6th, 2017. This EO is much like the first one. Today’s MuslimBan 2.0 does this:
• Bans all refugees for 120 days, also reducing number of refugees to 50,000 (from 120,000), not issuing new visas from 6 Muslim-majority countries; Yemen, Libya, Sudan, Somalia, Syria and Iran for 90 days.
• Iraqi nationals is excluded from this ban

Yemeni-Americans and immigrant communities in solidarity are organizing a march/rally to take place this Friday. We are coming together to protest the Muslim Ban 2.0 as well as the random Immigrant Customs & Enforcement (ICE) on ordinary undocumented immigrants. Separating families forcefully and banning family members from entering the country are not part of the American values that this country was founded upon.

In these difficult times, the Yemeni, Arab, and Muslim communities along with the Hispanic community in metro Detroit will come together for a Unity & Solidarity rally against the Muslim Ban 2.0 and random ICE raids which facts show are not making Americans any safer. This is an attack on our identities as Yemeni-Americans and Muslims. We are calling on Yemeni, Muslim, Hispanic, and Immigrant communities to join this coalition to stand up and fight back! An attack on a community is an attack on all communities.
####